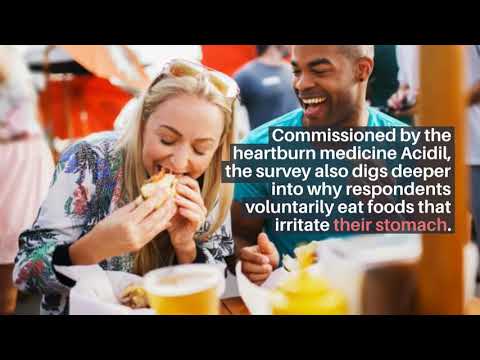 Nearly two-thirds of Americans admit to battling more digestive issues since the beginning of the coronavirus pandemic.

NEW YORK — ‘Tis the season for overeating. Three-quarters of Americans say that, around the holidays more than any other time of year, their eyes are bigger than their stomachs. That might be a bigger problem than usual this year, as 64 percent of a new survey have also experienced more digestive problems since the beginning of the pandemic.

The OnePoll study of 2,000 Americans who experience some form of digestive discomfort, reveals that the average person battles an upset stomach at least three times per week after eating. Seventy-eight percent of respondents say they consume foods that cause them discomfort at least a few times per month. Another 28 percent admit to consuming these foods weekly. Moreover, two in three people say the possibility of a flare-up due to food makes them dread eating meals they haven’t prepared themselves. Commissioned by the heartburn medicine Acidil, the survey also digs deeper into why respondents voluntarily eat foods that irritate their stomach. When it comes to why respondents eat things that don’t agree with them, about a third say it’s because their “trigger foods” are inconsistent.

Trigger foods are also some of the favorite foods for an unlucky 23 percent of respondents. Additionally, 16 percent cite peer pressure as the reason they continue to consume things that may upset them. These Americans say they eat trigger foods when everyone else is at a gathering of family or friends.

A valiant 78 percent try their best to avoid trigger foods regularly, but admit that the temptation to indulge is just too great sometimes. While 77 percent of respondents claim to be “somewhat” or “very” in tune with their digestive health, seven in 10 claim to not realize how full they are when they overeat.

An upset stomach can ruin your day — and your social life

The discomfort resulting from an upset stomach can also upset the social schedule for many people as well. Forty-five percent of respondents say they’ve missed social or family functions due to a desire to avoid food that could cause them discomfort. Nearly half have even missed out on a date or other romantic opportunity due to a flare-up. Forty-three percent say they’ve been made to feel guilty about, or ashamed of, their digestive discomfort by friends (54%) and siblings (53%).

“When it comes to digestion, everybody, and every body, is different. No one should make you feel bad about the things you are and aren’t comfortable eating, especially during the holidays,” says Janick Boudazin, pharmacist and CEO of Boiron, manufacturer of Acidil, in a statement.

“But that also means being prepared ahead of time for the possibility of a flare-up if you do indulge as it’s one of the best ways to manage any digestive discomfort.”

Plan ahead before a dining disaster

Researchers find preparation is indeed a key factor in respondents mitigating digestive discomfort. Over-the-counter medications (47%), prescription medications (42%), exercise (37%), and homeopathic medicines (35%) are among the top ways respondents actively manage their digestive health. Despite knowing they need to prepare, six in 10 say they only purchase digestive relief products when they have symptoms.

“What many people don’t realize is that certain forms of digestive relief such as homeopathic medicines can actually be taken beforehand to lessen the symptoms,” Boudazin adds. “The right degree of preparation, and using the right medicines, can help manage your digestive health and therefore ease the anxiety it can cause.”