ADELAIDE, Australia — The missing link has been found. No, not that missing link, but still a pretty major discovery. An ancient fish fossil discovered in Miguasha, Canada is providing some groundbreaking evolutionary insight into how the human hand evolved from fish fins.

Recently revealed by Flinders University and Universite du Quebec a Rimouski, researchers believe the Elpistostege fossil represents a big piece of the evolutionary puzzle regarding the transition from fish to tetrapods (four-limbed animals). The evolutionary transition period in which fish slowly started to venture into shallow waters and land, eventually producing the first land-based creatures, is believed to have taken place during the Late Devonian period millions of years ago.

The fossil shows a full 1.57 metre long fish, complete with its arm (pectoral fin) skeleton. This is the first ever a pectoral elpistostegalian fish fin fossil has been discovered intact. When researchers analyzed the fossil using high energy CT-scans they detected a humerus (arm), radius and ulna (forearm), phalanges organized in digits (fingers), and rows of carpus (wrist).

“Today we announce in the journal Nature our discovery of a complete specimen of a tetrapod-like fish, called Elpistostege, which reveals extraordinary new information about the evolution of the vertebrate hand,” says Strategic Professor in Palaeontology at Flinders University, Professor John Long, in a release. “This is the first time that we have unequivocally discovered fingers locked in a fin with fin-rays in any known fish. The articulating digits in the fin are like the finger bones found in the hands of most animals.” 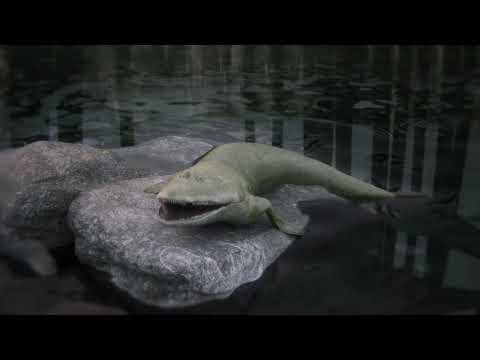 “This finding pushes back the origin of digits in vertebrates to the fish level, and tells us that the patterning for the vertebrate hand was first developed deep in evolution, just before fishes left the water,” he adds.

The evolution of hands and feet, of course, allowed life to make the transition from water to land. It isn’t an exaggeration to say this development is among the most important in the history of our planet.

In an effort to understand this evolutionary period, paleontologists have been studying the fossils of lobe-finned fish and tetrapods from roughly 400-350 millions years ago (elpistostegalians) for a number of years. However, those fossils are almost always incomplete. It’s the complete structure of this fossil that has set it apart.

This discovery is the cherry on top, so to speak, of years spent examining these fossils. Scientists now have a more complete understanding of how vertebrates evolved new land-based breathing, hearing, and feeding tendencies.

“The origin of digits relates to developing the capability for the fish to support its weight in shallow water or for short trips out on land. The increased number of small bones in the fin allows more planes of flexibility to spread out its weight through the fin,” comments Co-author Richard Cloutier from Universite du Quebec a Rimouski.

“The other features the study revealed concerning the structure of the upper arm bone or humerus, which also shows features present that are shared with early amphibians. Elpistostege is not necessarily our ancestor, but it is closest we can get to a true ‘transitional fossil’, an intermediate between fishes and tetrapods,” he adds.

The study is published in Nature.