DENVER, Colo. — The ancient skeleton of a baby girl is providing researchers with evidence that Stone Age humans practiced a form of gender equality 10,000 years ago. A team from the University of Colorado-Denver say the girl’s grave was richly decorated with a giant owl’s claw, over 60 pierced shell beads, and four pendants.

Nicknamed “Neve,” she is Europe’s first example of a female infant receiving a ceremonial burial. The discovery shows her community honored its youngest members — and female members — in the same manner as men. Study authors add the findings suggest early Mesolithic hunter-gatherers may have been a more civilized time than previously believed.

“The evolution and development of how early humans buried their dead as revealed in the archaeological record has enormous cultural significance,” says anthropologist Professor Jamie Hodgkins in a university release.

After mapping the baby’s DNA, researchers identified her as belonging to a group on a specific branch of the maternal tree of mankind. Scans of her teeth showed stress halted their development 47 and 28 days before birth. After delivery, the child only lived for 40 to 50 days.

Carbon and nitrogen levels revealed that her mother’s diet likely consisted of plants, berries, nuts, and meat. Further analysis of the ornaments adorning the infant shows the care invested in each piece going into her burial. Many of the pieces show wear and tear, suggesting early humans may have passed them down to their child.

“There’s a decent record of human burials before around 14,000 years ago,” Prof. Hodgkins says.

“But the latest Upper Paleolithic period and earliest part of the Mesolithic are more poorly known when it comes to funerary practices. Infant burials are especially rare, so Neve adds important information to help fill this gap.”

Her delicate remains were fully excavated from a cave in Liguria, Italy in 2018.

“It followed the end of the final Ice Age and represents the last period in Europe when hunting and gathering was the primary way of making a living. So it’s a really important time period for understanding human prehistory.”

Reshaping the role of women in the ancient past

The team adds this discovery sheds light on the “seemingly egalitarian funerary treatment” of an infant female. Mortuary practices often provide a window into the worldviews and social structure of past societies.

Child funerals show Neve was regarded with just as much love and importance as a male peer. She was afforded the same attributes of individual self, moral agency, and eligibility for acceptance.

Study authors add Neve shows that even the youngest females during this time still had the status of “full persons” in that society. Archaeology has historically been viewed through a male lens. Prof. Hodgkins worries there are many stories archeologists may have missed. 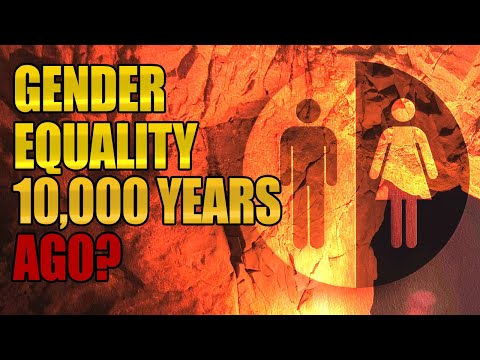 “Right now, we have the oldest identified female infant burial in Europe,” Hodgkins continues. “Archaeological reports have tended to focus on male stories and roles, and in doing so have left many people out of the narrative.”

“Protein and DNA analyses are allowing us to better understand the diversity of human personhood and status in the past. Without DNA analysis, this highly decorated infant burial could possibly have been assumed male,” the researcher says.

In Western society, archaeologists have historically assumed leaders and warriors were all or mostly male. However, DNA analyses have discovered the existence of female Viking warriors, non-binary leaders, and powerful Bronze Age female rulers. Finding a burial like Neve’s is reason to look more critically at archaeology’s past, according to Prof. Hodgkins.

“This is about increasing our knowledge of women, but also acknowledging that we as archaeologists can’t understand the past through a singular lens. We need as diverse a perspective as possible because humans are complex,” the study authors explains.

The cave, called Arma Veirana, is a popular attraction for local families. It lies on the southern rim of the Alps. Looters exposed 12,000-year-old tools that drew the international crew to the area.

They spent two seasons near the entrance recovering Neanderthal stone flakes and spearheads dating back more than 50,000 years.

The team also found the remains of ancient meals such as the butchered bones of wild boars and elk, and bits of charred fat. Exploring into the further reaches, Prof. Hodgkins and colleagues came across the pierced shell beads.

She was going through the articulated lines back in the lab when the researcher realized they were onto something. A few days later, using dental tools and a small paint brush, the researchers exposed parts of a child’s brain case — or cranial vault.

Hodgkins notes that a series of analyses uncovered remarkable details about the ancient burial site. Radiocarbon dating determined “Neve” was born about 10,000 years ago. Specifically, protein analysis and ancient DNA revealed the infant was a female belonging to a lineage of European women known as the U5b2b haplogroup.

The study in Scientific Reports follows the recent discovery of the 11,500-year-old burial of a similarly aged girl from Upward Sun River in Alaska.