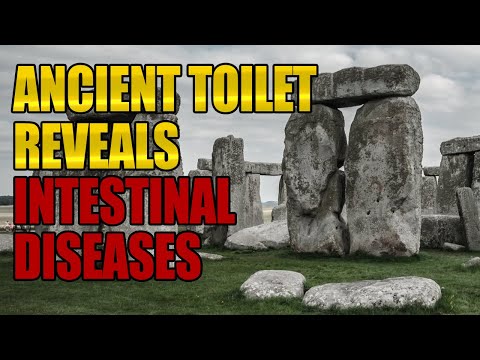 TEL AVIV, Israel — A 2,700-year-old stone toilet is revealing the not-so-luxurious lifestyles of the rich and powerful in ancient Jerusalem. Researchers from Tel Aviv University say they discovered the remains of intestinal parasite eggs in the garden bathroom of a lavish estate from the mid-seventh century BC. This points to even the wealthy of this era dealing with intestinal diseases which likely stayed with them for life.

Study authors explain that intestinal parasites, resulting from poor hygiene and unsanitary conditions, quickly lead to illnesses that cause abdominal pain, diarrhea, and even malnutrition. In children, parasites can also cause developmental delays.

At the Armon Hanatziv Promenade in Jerusalem, researchers discovered the remains of a private estate likely belonging to one of Jerusalem’s elite citizens during the Iron Age. In the garden, the team found the ancient bathroom, including the stone toilet and cesspit underneath. Here is where they unearthed four different kinds of intestinal parasites — roundworms, tapeworms, whipworms, and pinworms.

“The findings of this study are among the earliest observed in Israel to date,” says Dr. Dafna Langgut in a university release. “These are durable eggs, and under the special conditions provided by the cesspit, they survived for nearly 2,700 years. Intestinal worms are parasites that cause symptoms like abdominal pain, nausea, diarrhea, and itching. Some of them are especially dangerous for children and can lead to malnutrition, developmental delays, nervous system damage, and, in extreme cases, even death.”

Living with worms for life!

Dr. Langgut believes these findings reveal the state of human hygiene in ancient times, even under the best of circumstances. The presence of parasite eggs in a 2,700-year-old wealthy person’s toilet likely come from poor sanitary practices which led to fecal contamination in their food and drinking water. Researchers add other problems may have included a lack of knowledge about hand washing, the use of human feces to fertilize field crops, and improperly cooking beef and pork.

With no medications to treat worms, the team says people in Iron Age Jerusalem likely suffered from parasites for life. They were probably an annoying and long-lasting infectious disease, similar to lice and pinworms in young children today. However, researchers say this epidemic affected the entire population.

Worms still exist today, but modern medicine can quickly diagnose and treat people with these parasites, so they don’t spread.

A toilet was ‘a status symbol’ in ancient times

While today’s rich and famous often show off their wealth in flashy cars or expensive clothing, study authors say having a toilet was the real luxury item of ancient civilization.

“Toilet facilities were extremely rare at that time and were a status symbol – a luxury facility that only the rich and high-ranking could afford,” Langgut and the Israel Antiquities Authority’s Ya’akov Billig explain.

“Today, archeological research is reaching remarkable achievements and leading to a better understanding of past lifeways – an understanding, it seems, that will only continue to evolve,” adds Eli Escozido, director of the Israel Antiquities Authority.

The discovery of the stone toilet gave researchers an opportunity to apply a field of science called archeoparasitology, which Dr. Langgut is developing. In this emerging field, scientists find microscopic remains of intestinal worm eggs in order to learn about ancient diseases throughout history.

“Studies like this one help us document the history of infectious diseases in our area and provide us with a window into the lives of people in ancient times,” Dr. Langgut concludes.

The findings are published in the International Journal of Paleopathology.