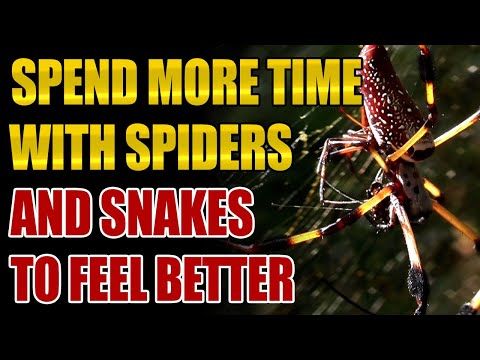 PÉCS, Hungary — Fear of spiders (arachnophobia) and snakes (ophidiophobia) rank among the most common phobias. Many fully-grown adults recoil in terror when they see a spider on the wall, but interesting new European research suggests the best way to overcome such fears is to become better acquainted with nature.

After surveying over a thousand people, researchers found those who feel connected to nature had fewer snake and spider phobias. Further, those with a strong connection to nature and no fears of spiders and snakes often showed a strong desire to spend time in nature and a motivation to protect it.

“Analysis of our data showed one clear picture: the more you like nature and feel a part of it, the less you are at risk of developing a snake or spider phobia, an anxiety disorders which can significantly lower your quality of life,” says study co-author Dr. Jakub Polák of Charles University, Czech Republic, in a media release.

Bidirectional relationship between phobias and nature

Notably, the link between perceived connection to nature and such fears appears to work both ways.

Researchers observed that older adults and those living in less urban areas were less afraid of both spiders and snakes. This work provides yet another reason to spend more time around some greenery and wildlife. The extensive benefits of spending time in nature, such as improved mood, better health, and less stress, are well-documented.

“Connectedness to nature, can have a wide range of positive effects. In our study we find that it may prevent the development of animal phobias or could facilitate coping with such fear if they already exist. It’s also been shown that being connected to nature carries health benefits and can result in more knowledge and a more positive attitude towards animals, along with greater environmental responsibility,” explains study co-author Dr. András Norbert Zsido, at the University of Pécs, Hungary.

Why are snake and spider phobias so common?

Why are arachnophobia and ophidiophobia such common fears? Researchers explain these phobias can be traced back to our evolutionary drive to survive. Plenty of snakes and spiders are poisonous and pose a real threat to humans. This was especially true for early humans living in much rougher conditions. Fast forward to modern times, however, and these phobias are more of a hindrance than a help. Many people complain their fears of spiders or snakes interfere with their daily lives.

Each participant’s perceived connection to nature was measured in accordance with the Nature Relatedness Scale. Surveys asked participants to either agree or disagree with various statements related to nature. These included questions on conservation, feelings of belonging to nature, and feeling comfortable while outdoors in the wilderness.

Researchers screened for spider and snake fears by having study volunteers fill out several surveys. Questions included fainting or avoidance behavior in reaction to snakes and spiders. Then, each person was shown images of actual snakes and spiders and rated the pictures according to three scales: Are the pictures pleasant or unpleasant? Did the images make them feel calm or excited? Did they feel dominance or dominated by the animals in the pictures?

This research was correlational, so they did not establish the exact nature of the relationship between connection to nature and animal phobias.

“This was a cross-sectional study, so we were not able to measure possible effects of nature relatedness on fears over time. Whether pro-environmental education and increased time spent in natural environments could reliably decrease fears is still an open question.” Dr. Zsido notes.

Can time in nature prevent other phobias?

One question on researchers’ minds: does a strong connection with nature lower one’s chances of developing other animal phobias?

“I would like to see if the same association between connectedness to nature and animal fears would be found in other countries with a different culture, different levels of urbanization, and potentially different attitudes towards animals. We suppose that fear of snakes and spiders is universal all over the world, but is the protective role of nature connectedness universal as well? That would be worth future research,” Dr. Polák adds.

“I would like to know why some people never seem to leave behind their fears, even if they have a lot of experience with the object that evokes the feeling. Is this due to the nature of the stimuli itself, or maybe to individual differences?” Dr. Coelho concludes.

The study is available to read in People and Nature.