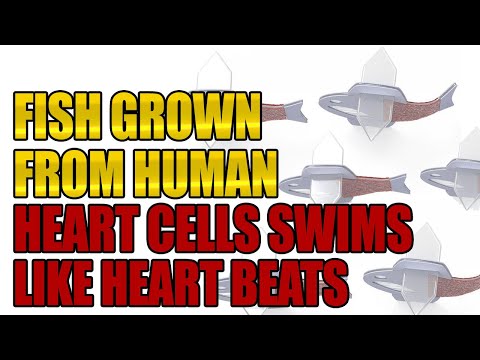 CAMBRIDGE, Mass. — Scientists from Harvard University have created a fish that’s all heart — literally. Using stem cells, researchers have grown their own artificial fish which can actually swim around their tank by mimicking the beating of a human heart!

A team from Emory University and Harvard collaborated on the development of these autonomous biohybrid fish in order to learn more about creating artificial heart pumps. Their hope is this is the first step in building replacement organs for children (and possibly adults) with heart disease.

“Most of the work in building heart tissue or hearts, including some work we have done, is focused on replicating the anatomical features or replicating the simple beating of the heart in the engineered tissues. But here, we are drawing design inspiration from the biophysics of the heart, which is harder to do,” Parker continues.

“Now, rather than using heart imaging as a blueprint, we are identifying the key biophysical principles that make the heart work, using them as design criteria, and replicating them in a system, a living, swimming fish, where it is much easier to see if we are successful.”

This isn’t the first time Parker’s team has built their own animals out of cardiac muscle cells. In 2012, the lab team created a jellyfish-like biohybrid using rat cells. Four years later, they developed an artificial stingray which could also swim using the same process.

A fish that acts just like a human heart

In the new study, the team used human stem-cell derived cardiomyocytes for the first time to create an autonomous biohybrid device. These cells are responsible for generating contractions within a healthy heart — creating your heartbeat.

Unlike their previous artificial animals, the new fish has two layers of heart muscle cells on each side of its fin. Just like the muscles in a human heart, when one side contracts, the other side stretches out. In the mechanical zebrafish, this back-and-forth process actually propels the fish through the water for more than 100 days.

“By leveraging cardiac mechano-electrical signaling between two layers of muscle, we recreated the cycle where each contraction results automatically as a response to the stretching on the opposite side,” explains Keel Yong Lee, a postdoctoral fellow at SEAS. “The results highlight the role of feedback mechanisms in muscular pumps such as the heart.”

Along with the layers of muscle cells, the team also created an autonomous pacing node which basically acts like a pacemaker for the artificial fish. It controls the frequency and rhythm of the contractions taking place in the heart muscles. Together, the pacemaker and two layers of cells generate a continuous, spontaneous, and orderly set of movements in the animal’s tail — much like what goes on in an actual heart.

“Because of the two internal pacing mechanisms, our fish can live longer, move faster and swim more efficiently than previous work,” says co-first study author Sung-Jin Park, a former postdoctoral fellow in the Disease Biophysics Group at SEAS. “This new research provides a model to investigate mechano-electrical signaling as a therapeutic target of heart rhythm management and for understanding pathophysiology in sinoatrial node dysfunctions and cardiac arrhythmia.”

Artificial fish get better with age

Unlike a normal fish aging in the sea, the biohybrid fish actually gets stronger as it grows older. As the cardiomyocyte cells continued to mature, the study found that muscle contraction amplitude, maximum swimming speed, and muscle coordination all improved over the course of a month of swimming.

Later on, the artificial fish actually matched the swimming speed of a real-life zebrafish from the wild. The team is already looking to create even more complex creatures using this method.

“I could build a model heart out of Play-Doh, it doesn’t mean I can build a heart,” Parker says.

“You can grow some random tumor cells in a dish until they curdle into a throbbing lump and call it a cardiac organoid. Neither of those efforts is going to, by design, recapitulate the physics of a system that beats over a billion times during your lifetime while simultaneously rebuilding its cells on the fly. That is the challenge. That is where we go to work.”