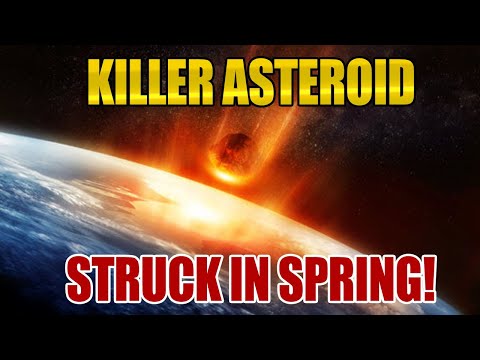 UPPSALA, Sweden — New research shows one particular spring day hundreds of millions of years ago spelled the end for dinosaurs. A team of European scientists has concluded the asteroid that killed most of the dinosaurs hit the Earth during spring.

The research team analyzed thin sections of bones from fishes that died less than an hour after the asteroid hit. They used high-resolution synchrotron X-ray scans and carbon isotope records to reach this conclusion.

To study the time of extinction, an international team of scientists traveled to North Dakota to study fossils. The Tanis locality in North Dakota contains fossilized paddlefishes and sturgeons believed to be victims of the Chicxulub meteorite that killed the dinosaurs.

When that asteroid hit Earth, the impact “rocked” the continental plate. This resulted in massive standing waves across bodies of water all over the planet. Then, within an hour of contact, those waves led to the “mobilization” of gigantic volumes of sediment that buried fishes alive. On land, shards of the asteroid called spherules rained down from the sky.

Preserved fish fossils give evidence of when dinosaurs went extinct

The prehistoric fish fossils within this area of North Dakota were perfectly preserved. Their bones showed virtually no signs of geochemical alteration. When placed under a synchrotron X-ray, soft tissues from hundreds of millions of years ago remained.

“These bones registered seasonal growth very much like trees do” says Sophie Sanchez of Uppsala University and the ESRF in a press release. “The retrieved growth rings not only captured the life histories of the fishes but also recorded the latest Cretaceous seasonality and thus the season in which the catastrophic extinction occurred,” adds senior study author Jeroen van der Lubbe of the VU in Amsterdam.

The distribution, shapes, and sizes of the bone cells, which fluctuate with the seasons, provided more evidence. “In all studied fishes, bone cell density and volumes can be traced over multiple years. These were on the rise but had not yet peaked during the year of death,” explains Dennis Voeten of Uppsala University.

“This temporary increase of ingested zooplankton enriched the skeleton of its predator with the heavier 13C carbon isotope relative to the lighter 12C carbon isotope,” explains Suzan Verdegaal-Warmerdam of the VU Amsterdam. “The carbon isotope signal across the growth record of this unfortunate paddlefish confirms that the feeding season had not yet climaxed–death came in spring,” comments lead author Melanie During from Uppsala University and the VU Amsterdam.

Findings explain why some species survived and others did not

When Chicxulub hit our planet, it caused the extinction of all non-avian dinosaurs, pterosaurs, ammonites, and most marine reptiles. However, mammals, birds, crocodiles, and turtles all survived. The new study helps explain why certain life forms are gone and why others are alive.

“This crucial finding will help to uncover why most of the dinosaurs died out while birds and early mammals managed to evade extinction,” During concludes.

The researchers published the study in Nature.