PERTH, Australia — It’s 12 million light years away, but astronomers have captured the clearest images of a gigantic black hole in one of our closest neighboring galaxies.

Researchers at the International Centre for Radio Astronomy Research (ICRAR) say their pictures come from the radio emissions produced by the powerful singularity (black hole) at the heart of galaxy Centaurus A. Scientists say it’s the closest actively feeding supermassive black hole to Earth.

What is a black hole?

Black holes are places in space where gravity is so strong that nothing — not even light — can escape its pull. Since light doesn’t get out, black holes are technically invisible. Space telescopes know they exist in part because of the powerful radio signals these singularities emit.

The new study notes that as black holes suck in nearby gases, they eject material at nearly the speed of light. This causes “radio bubbles” to grow over hundreds of millions of years.

The researchers used the Murchison Widefield Array (MWA) telescope to watch this phenomenon take place in Centaurus A. When looking at this eruption from Earth, the ejection spans a distance of eight degrees across the sky. While that may not sound like much, it’s actually the same as looking at 16 full Moons side-by-side in the night’s sky. 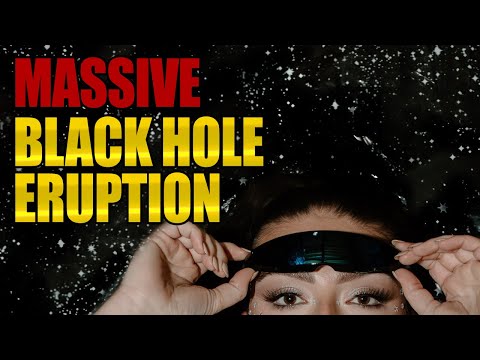 “These radio waves come from material being sucked into the supermassive black hole in the middle of the galaxy,” says lead author Dr. Benjamin McKinley from Curtin University in a media release.

“It forms a disc around the black hole, and as the matter gets ripped apart going close to the black hole, powerful jets form on either side of the disc, ejecting most of the material back out into space, to distances of probably more than a million light years,” Dr. McKinley continues. “Previous radio observations could not handle the extreme brightness of the jets and details of the larger area surrounding the galaxy were distorted, but our new image overcomes these limitations.”

‘We can learn a lot from Centaurus A’

Centaurus A is the Milky Way’s closest radio galaxy. These are galaxies with unusually strong radio waves emanating from them. Radio galaxies can produce signals up to million times greater than a normal galaxy like our own.

“We can learn a lot from Centaurus A in particular, just because it is so close and we can see it in such detail,” Dr. McKinley explains. “Not just at radio wavelengths, but at all other wavelengths of light as well.

“In this research we’ve been able to combine the radio observations with optical and x-ray data, to help us better understand the physics of these supermassive black holes,” the researcher says.

“In this model, clouds of cold gas condense in the galactic halo and rain down onto the central regions, feeding the supermassive black hole,” explains astrophysicist Dr. Massimo Gaspari from Italy’s National Institute for Astrophysics.

“Triggered by this rain, the black hole vigorously reacts by launching energy back via radio jets that inflate the spectacular lobes we see in the MWA image. This study is one of the first to probe in such detail the multiphase CCA ‘weather’ over the full range of scales,” Dr. Gaspari continues.

Dr. McKinley adds that Centaurus A is brighter at its center, where there’s more activity and a lot more energy for our telescopes to see.

“Then it’s fainter as you go out because the energy’s been lost and things have settled down,” McKinley says. “But there are interesting features where charged particles have re-accelerated and are interacting with strong magnetic fields.”

The sharpest picture so far

“The MWA is a precursor for the Square Kilometre Array (SKA)—a global initiative to build the world’s largest radio telescopes in Western Australia and South Africa,” Tingay says.

“The wide field of view and, as a consequence, the extraordinary amount of data we can collect, means that the discovery potential of every MWA observation is very high. This provides a fantastic step toward the even bigger SKA.”