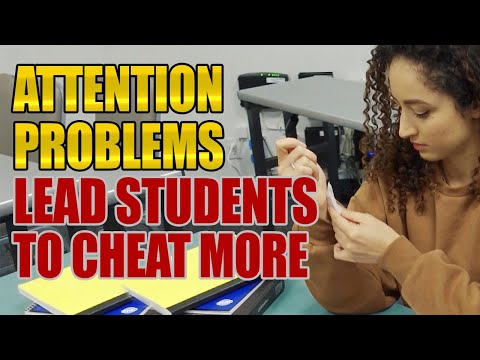 COLUMBUS, Ohio — High school students with attention problems are more likely to cheat than their peers, a new study reveals. Researchers from The Ohio State University found a connection between inattentive students, hyperactivity, and a tendency to cheat more in class.

Although some children receive an official diagnosis for attention deficit hyperactivity disorder (ADHD), the team says many others never do and therefore don’t get the help they need in school.

“Students diagnosed with ADHD get a lot of support and help in school, but many other kids with attention problems fall through the cracks,” says lead author and professor of educational psychology Eric Anderman in a university release. “They don’t get the help they need that could help them do better in school and avoid cheating.”

Study authors followed 855 students, collecting data from them twice, about a year apart each time. The team measured each child’s inattention by asking them to rate how much trouble they have paying attention to teachers, how forgetful they are, and whether they think they have a short attention span.

From there, researchers rated each student’s hyperactivity using the teens’ responses to questions about how hard it is for them sit still and how often they talk over other people. Finally, the team evaluated each child’s likelihood to cheat by having the students rate how likely they are to use cheat sheets during tests or copy answers from classmates.

Results reveal that high schoolers who have more trouble paying attention reported having higher levels of hyperactivity. These students were also more likely to cheat in class.

Hyperactivity is not the cause of cheating

Although hyperactive students cheated more, researchers say this isn’t the root cause of their cheating. The study did not find a link between hyperactivity scores and cheating. Instead, inattention scores drove up both hyperactivity and the likelihood of cheating.

“Inattention is the driver here, the issue that leads to problems in the classroom,” Anderman explains. “The student is not paying attention, so he gets out of his seat and goofs around, and when you put both together, that is a perfect setup for more cheating.”

The team also accounted for a number of different factors which studies link to cheating, including mental health, having a learning disability, gender, ethnicity, and poor grades. Results show inattention still displays a direct link to a child’s cheating tendencies.

The study did not find any connection between how disruptive a student is and their likelihood to cheat.

Between seven and nine percent of children 17 and younger have ADHD. However, researchers say up to three times as many students have problems with their attention span or hyperactivity — but don’t meet the threshold for an ADHD diagnosis.

“There are so many evidence-based programs that can help these students who have problems with attention learn to self-regulate, to learn how to be a learner,” Anderman concludes. “If they had access to these programs, they could learn in class and they wouldn’t have to cheat. And these students are not learning partially because of attention issues they can’t help.”

The study is published in the journal Psychology in the Schools.