Skip to content
Beauty News, Best Of The Best, Men

Your scent is a part of your style and can leave a lasting impact on those who meet you (for better or for worse!). We’re not alone in that feeling, a recent study shows that a man’s scent was a major factor for women seeking a potential partner. Of course, finding the right cologne can be challenging with so many options. Doesn’t it seem like the scents all seem the same after just smelling a few? We’re hoping to make that process easier for you — rather than sniffing bottle after bottle, we took a look at 10 reviews by the pros and came away with the seven best colognes for men.

You can thank us in advance. In general, men who wear cologne may feel more confident, more attractive, and leave a better first impression on others.

If you’re on the dating scene, your cologne choice is an important part of you.  A recent study showed that hygiene is a major factor for Americans seeking a partner. Proper hygiene also has powerful benefits, easing stress & anxiety, boosting sleep, and improving self-image. So on top of the basics, guys should look to find a scent that resonates with them.

After all, sense of smell is still one of the most powerful senses we have, even though it’s apparently gotten weaker over time, scientists say. Perhaps because of that slight loss of smell, a high quality cologne can be the perfect solution for those men looking to stand out…whether in the board room or on a date!

Carrying an appealing smell could also help you make friends, perhaps. One study shows that people actually choose their friends — based on how they smell! Researchers in report that people with similar body odors are more likely to become friends. “This is not to say that we act like goats or shrews – humans likely rely on other, far more dominant cues in their social decision-making. Nevertheless, our study’s results do suggest that our nose plays a bigger role than previously thought in our choice of friends,” notes Prof. Noam Sobel of the Weizmann Institute of Science in Israel.

So which men’s cologne is the best? StudyFinds has researched 10 expert websites and compiled a list of the most frequently recommended scents.  If you’ve got your own suggestions, please leave them in the comments below!

The List: Top 7 Colognes For Men, According to Experts

Noted for its strong, intriguing scent, Chanel’s Bleu de Chanel landed on seven of our experts’ top lists.  Chanel, of course, is widely known in the fragrance industry, with Chanel N° 5 being one of the top selling perfumes within the USA. It’s Bleu, however, that is a heavy favorite for 2023.

The standout scent was praised for its “woody cedar undertone with lingering traces of grapefruit, making it a fresh, clean-smelling option,” according to Brides. Meanwhile, CNN Underscore ranks it tops overall, highlighting how the cologne’s “citrus and amber notes complement each other perfectly, while the cedarwood adds an element of punch.”

No matter where you go — even down under — Bleu is turning heads in the right direction. “Commanding a strong presence, this timeless fragrance is elegant and captivating blending citrus and woods to evoke a fresh, clean scent. True to the continuous appeal of Chanel, this is a classic fragrance that will stay is style – perfect for becoming a new signature scent for the sophisticated gentleman,”says The Market Herald in Australia.

Dior has long been a player in the high-end luxury fashion market and the Sauvage is no different, having been around since 1966. The Sauvage has been a top selling scent ever since. For those wanting to be noticed for their cologne, it might be the option for you.

This cologne is a more bold choice in scents, reviewers say, though the Robb Report names it the best cologne to wear in the office.  CNN Underscore writes that Dior Savage “contains hints of ambroxan, Sichuan pepper and reggio bergamot, making it perfect for the man who wants to stand out from the crowd.”

SPY also highlights the pepper and bergamot hints in its review, and notes the cologne is a great choice if you’re looking to spend under $100. “Complex in composition yet raw in scent, Dior Sauvage evokes grandeur and summons compliments no matter the gathering,” they write.

Adds T3: “Like its poster boy Johnny Depp, Sauvage is an intriguing mix of rugged manliness (vetiver, pepper, patchouli) and borderline feminine refinement (lavender, geranium) that’s hard to pin down, but there’s no end of wearers complimenting its wondrous fusion of scents.”

There may be no bigger name when it comes to men’s fashion than Versace, and Eros is certainly living up to that expectation of the best of the best.

“Playful and warm yet sexy and charming, Eros expertly blends minty freshness with a touch of sweetness for an irresistible result that’s as enchanting as it is tantalizing. Best part: Its cool spiciness means it’s suitable for all seasons,” boasts Forbes.

Even before trying the cologne, reviewers also love the design of the bottle alone. “We don’t know what’s cooler, the beautiful Art Deco–style bottle or the addition of mint in this fresh and tropical scent. Infused with orange, Italian lemon zest, green apple, tonka beans, amber, woody vanilla, vetiver, and moss, this fusion of scents wears well in the summer but is a pretty universal cologne overall,” says Brides.

Like Sauvage, Eros is a statement scent that will have those around you noticing your aroma right away. “The bold mix of citrus and woods in this cologne (think the classic Eros but more intense) is best worn when you want to make an entrance—and leave a lasting impression,” writes Men’s Health.

Let’s be honest: There are far too many colognes to choose from and sometimes it’s good to just go with that one great scent that you simply can’t go wrong with. Well, there’s no better choice than Calvin Klein’s longtime favorite Eternity.

“Calvin Klein’s Eternity is an absolute powerhouse of a cologne that dudes have been rocking all over the globe for years. It has an OG-centric aesthetic, making it a must-have for any guy’s cologne collection,” says SPY.

Eternity is also a winner if you’re looking for a cologne to give as a gift because it’s so universally beloved — and because it’s not as expensive as others on the list. “Eternity is evergreen: sage, cedar, bergamot, and moss combine for an earthen and refreshing finish, and at a price that is friendly to the greens in your wallet. This is one of those scents that everyone recognizes, since it’s an easy pick as a signature scent, or as a gift for the cologne-curious,” writes GQ.

If an industry standard like Eternity isn’t for you, Tom Ford Tobacco Vanille is definitely something different worth trying.  As Forbes jokes, “The Tobacco Vanille is grandpa’s smoking jacket meeting grandma’s freshly baked vanilla cookies.”

Don’t let that fool you – the Vanille is still an intriguing cologne for men. Forbes adds that the cologne is “a refined balance that is not overly sweet or overly smoky, the smell remains warm, inviting and—most importantly—worthy of compliments.”

Tom Ford’s Tobacco Vanille is a scent may appeal to outdoorsy men who enjoy the finer things in life, especially a bold cologne. “With ginger, tobacco and cocoa, this high-end Tom Ford cologne is the ultimate sweet and spicy scent for the person who just can’t pick between the two,” says CNN Underscored.

“Influenced by the scents and sights of the coastal jungle in Bali,” Blu Atlas Atlantis is a newcomer that joined the mix in 2022.

The scent alone is a huge differentiation from the competition, appealing to folks who want to avoid a strong chemical brew. It is made without any phthalates or other unwanted additives, as noted by Forbes. The formula is also vegan and cruelty free.

Perhaps the final selling point of the Blu Atlas Atlantis was the versatility that the scent offers to those who wear it. The Market Herald in Australia notes that its fragrance profile has “an aromatic and earthy scent with key notes of bergamot, clary sage, and patchouli. The long-lasting scent is masculine wonderfully matching with men who enjoy an active lifestyle and spend time in nature,” they write.”

One of the most well-known cologne brands, and a staple within the industry since its inception in 1996, Acqua di Gio by Giorgio Armani is another one of those “can’t go wrong” bottles.

Acqua di Gio’s scent, a combination of “bergamot, neroli, rosemary, and patchouli to scream earthy in the best way” (Brides) give this cologne a great smell without being too overpowering. Other expert sites mention hints of marine, lavender, and green tangerine.

The Armani cologne also received high praise for its extended life and wearability, meaning your scent won’t quickly go away. In fact, Men’s Health notes the scent has “eternal wearability.” 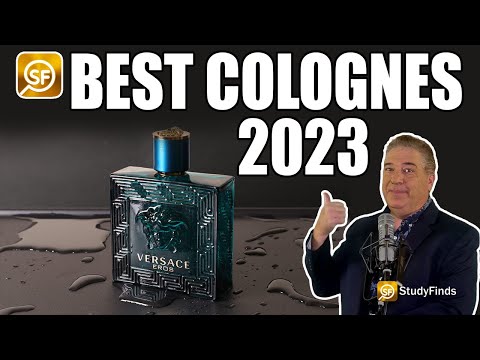 Note: This article was not paid for nor sponsored. StudyFinds is not connected to nor partnered with any of the brands mentioned and receives no compensation for its recommendations.

Best Luggage For Kids In 2023: Top 5 Children’s Suitcases Most Recommended By Experts15 mins ago

Best Hotels In San Juan, Puerto Rico: Top 5 Places To Stay, According To Experts39 mins ago