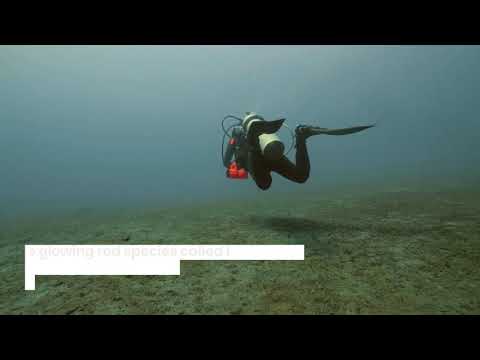 NEW YORK — Biofluorescence is the absorption of light from living organisms which is then reemitted as another color. This phenomenon most commonly occurs in tropical species. Now, researchers report they’ve observed it in a species of Arctic fish. The luminous snailfish was discovered off the eastern Greenland coast during a study of iceberg ecosystems.

Explorers of the Constantine S. Niarchos Expedition found the snailfish emitting red and green colors. Although biofluorescence has been know to occur in a multitude of fish species, this is the first known occurrence of the ability in an Arctic fish species.

“Overall, we found marine fluorescence to be quite rare in the Arctic, in both invertebrate and vertebrate lineages,” says John Sparks, one of the authors of the study and a curator in the Museum’s Department of Ichthyology, in a statement. “So we were surprised to find these juvenile snailfish brightly fluorescing in not just one, but two different colors, which is very unusual in a single species.”

Biofluorescence discovery ‘like a moment straight from ‘The Life Aquatic”

In previous studies carried out by Sparks and researcher David Gruber, they discovered over 180 new biofluorescent fish species. This trait has been well established in tropical fishes that dwell in areas with constant daylight. However, in habitats like the Arctic with extended periods of darkness, researchers were uncertain how the lack of light would affect the ability of certain species to biofluoresce.

During the expedition, they observed marine fishes that normally exhibit biofluorescence in tropical environments; however, in the Arctic environment of Greenland, these same species seemed to lack this ability. Sparks and Gruber found the multicolored snailfish species Liparis gibbus to be an exception. “Finding a red and green biofluorescent snailfish on a dive among icebergs at night felt like a moment straight from ‘The Life Aquatic’ with Steve Zissou,” says Gruber, who is a research associate at the Museum and a biology professor at Baruch College.

Researchers also observed biofluorescence exhibited in an adult kelp snailfish captured off the coast of Alaska in the Bering Strait. The glowing red species called L. tunicatus was scanned and studied by colleagues at the NOAA Fisheries Service. This phenomenon has been studied by Sparks and Gruber for over seven years, during which they found it to be widespread among fishes, including many new species. Although the mechanism by which biofluorescence occurs is known, the purpose behind it is still unknown.

“We are now focusing our efforts on determining the function of fluorescence in various fish groups, including catsharks, where we have shown that bright green fluorescence enhances contrast in their pigmentation pattern, making it easier for individuals to see each other at depth,” said Sparks.

This study is published in the American Museum Novitates.

Hormone injection could treat low libido, bring back desire for men and women12 mins ago