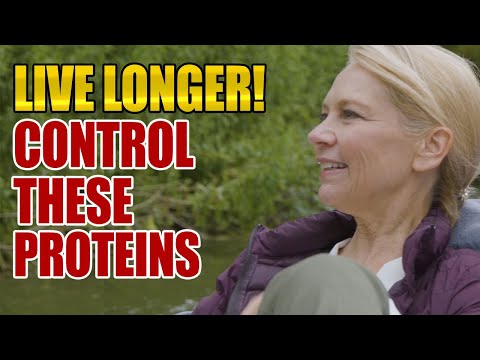 EDINBURGH, Scotland — Who doesn’t want to live a long, active life? Humans have been searching for the figurative (and literal) “fountain of youth” for centuries, but new research by a team at the University of Edinburgh suggests the key to a healthy life has been circulating throughout our bodies all along. Scientists report two specific blood proteins play a major role in determining an individual’s overall health and longevity.

The aging process, to a certain extent, is unavoidable. Despite this, study authors set out to investigate which specific blood proteins hold more sway than others when it comes to aging. Certain people naturally exhibit higher or lower levels of various proteins due to their genetics. In such cases, these protein levels can end up impacting health.

Of course, from the daily decisions people make each day to the genetic history of their families, a number of factors influence mortality. This work is shedding light on the role of blood proteins within this larger process.

The research team analyzed the results of six large genetic studies focusing on aging. Each of those studies featured a large dataset of genetic information encompassing hundreds of thousands of people. After assessing 857 proteins, study authors identified two in particular that show “significant negative effects across various aging measures.”

Individuals who inherited DNA from their parents containing these two proteins tended to be frailer, had lower self-rated overall health scores, and were less likely to enjoy a long lifespan in comparison to others.

“The identification of these two key proteins could help extend the healthy years of life. Drugs that lower these protein levels in our blood could allow the average person to live as healthy and as long as individuals who have won the genetic lottery and are born with genetically low LPA and VCAM1 levels,” says Dr. Paul Timmers, lead researcher in Edinburgh’s MRC Human Genetics Unit, in a university release.

One of these proteins is called apolipoprotein(a) (LPA), produced in the liver, and it may play a role in blood clotting. Too much LPA can lead to an increased risk of atherosclerosis, which refers to the arteries becoming clogged with fatty substances. Excess LPA also has a link to increased risk of both heart disease and stroke.

The second protein, called vascular cell adhesion molecule 1 (VCAM1), primarily exists on the surfaces of endothelial cells. These are single-cell layers that line the blood vessels. VCAM1 controls the expansion and retraction of blood vessels, an important function in both blood clotting and immune responses. Bodily VCAM1 levels tend to increase whenever people are dealing with an infection, allowing immune cells to cross the endothelial layer.

Study authors theorize that drugs capable of lowering levels of LPA and VCAM1 may help improve both quality and length of life.

There is already one clinical trial underway testing a drug that reduces LPA levels as a way to lower heart disease risk. There are currently no clinical trials focusing on VCAM1, but recent mouse studies have indicated that lowering VCAM1 levels improves brain health during old age.

The study is published in the journal Nature Aging.