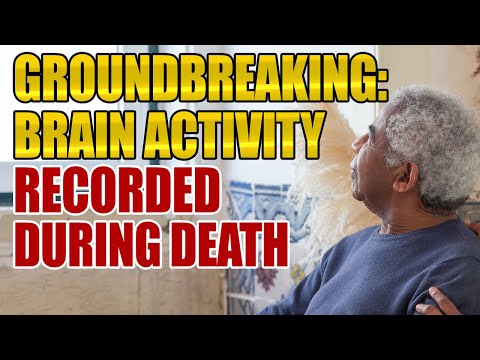 TARTU, Estonia — What really happens to you — particularly your brain — when you die? The notion of “your life flashing before your eyes” has been a cultural expression for over a century, depicted in countless movies, books, and other works of fiction. Now, groundbreaking new research by a team at the University of Tartu is providing the first ever record of brain activity during death.

The data, at the very least, suggests that our brains indeed continue working not only as we pass away, but even in the seconds following heart stoppage. Recorded brain gamma waves during death were similar to those that occur during dreaming and meditation.

Albert Einstein once said that time is relative, meaning the perceived rate by which time passes depends on the person and situation. For example, waiting for the clock to reach 5 p.m. on a Friday can feel like an eternity, but the weekend usually ends in the blink of an eye.

Could our brains really “replay” an entire lifetime’s worth of memories and moments within a matter of seconds upon death? Countless people who have had near-death experiences testify as much, but up until now neuroscientists have struggled to make sense of what happens in the mind during and immediately after death.

This latest research supplies serious evidence that the brain remains both active and coordinated during and after the “death transition.” Interestingly, further data also suggests that this “life replay” is a programmed, biological response that comes naturally to human brains — and possibly many other species as well.

Researchers accomplished this by monitoring an 87-year-old epilepsy patient near the end of their life. Dr. Raul Vicente of the University of Tartu and his team used electroencephalography (EEG) to detect the patient’s seizures and provide treatment. Unfortunately, during an EEG recording session the patient suffered a heart attack and died. This event was unexpected and tragic, but it did provide the research team with a unique opportunity to view brain activity in real-time as an individual passes away.

“We measured 900 seconds of brain activity around the time of death and set a specific focus to investigate what happened in the 30 seconds before and after the heart stopped beating,” says study organizer Dr. Ajmal Zemmar, a neurosurgeon at the University of Louisville, in a media release. “Just before and after the heart stopped working, we saw changes in a specific band of neural oscillations, so-called gamma oscillations, but also in others such as delta, theta, alpha and beta oscillations.”

“Through generating oscillations involved in memory retrieval, the brain may be playing a last recall of important life events just before we die, similar to the ones reported in near-death experiences,” Dr. Zemmar explains. “These findings challenge our understanding of when exactly life ends and generate important subsequent questions, such as those related to the timing of organ donation.”

Is there a silver lining at the moment of death?

While this is the first documented case of human brain activity during death, scientists have recorded similar gamma brain wave fluctuations in the brains of dying rats. This suggests, according to the research team, that this “life replay” phenomenon may be a built-in biological response to death “conserved across species.”

These findings are astounding, but ultimately limited in scope. After all, only one individual’s brain was recorded, and that patient had been dealing with a serious condition, seizures, and swelling. Study authors say all of those factors may have influenced the recorded brain activity. Moving forward, the team plans on researching this topic further. For now, though, they see this work as a source of hope.

“As a neurosurgeon, I deal with loss at times. It is indescribably difficult to deliver the news of death to distraught family members,” Dr. Zemmar concludes. “Something we may learn from this research is: although our loved ones have their eyes closed and are ready to leave us to rest, their brains may be replaying some of the nicest moments they experienced in their lives.”

The study is published in Frontiers in Aging Neuroscience.

How do you save a friendship? Researchers suggest acting more like them39 mins ago