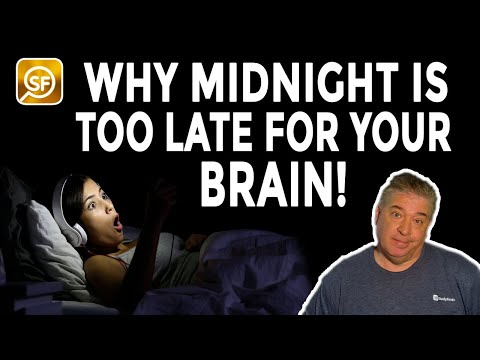 BOSTON — There’s a saying that “nothing good happens after midnight.” Now, researchers from Mass General Research Institute say there may be scientific evidence to back that claim up!

The team has created a new hypothesis that the human brain is not meant to be awake after midnight. Moreover, they say staying up late only leads to more impulsive behavior and high-risk decisions, such as drinking, overeating, gambling, or criminal activity.

Specifically, researchers suspect that staying awake during the biological circadian night (the middle of the night for most people) causes neurophysiological changes in the brain. This causes people to view the world more negatively than they do during the daytime.

“The basic idea is that from a high level, global, evolutionary standpoint, your internal biological circadian clock is tuned towards processes that promote sleep, not wakefulness, after midnight,” says senior author Dr. Elizabeth Klerman, an investigator in the Department of Neurology at Massachusetts General Hospital, in a media release.

Klerman is hoping their hypothesis will lead to further studies on how day-night differences in our circadian rhythms impact human behavior, decision-making, and job performance. The results could have important implications for countless people who have to stay awake in the middle of the night — including police officers, pilots, and health care workers. Study authors add that understanding how the brain changes after midnight could even lead to new strategies to combat crime, curb substance abuse, and prevent suicides.

“There are millions of people who are awake in the middle of the night, and there’s fairly good evidence that their brain is not functioning as well as it does during the day,” Klerman says. “My plea is for more research to look at that, because their health and safety, as well as that of others, is affected.”

The brain gets a bit risky after midnight

Previous studies have found that people are more likely to engage in harmful behaviors during the night. Statistically, incidents of suicide, drug use, and violent crime are all more common at night. At the same time, people are also more likely to make unhealthy food choices after dark, including chowing down on more processed foods, fats, and carbohydrates.

Study authors admit that some of this is explainable without looking at a person’s brain. It’s obviously easier to commit crimes or get away with unhealthy habits under the cover of darkness — when there are simply fewer people around to catch you.

However, the team notes that there’s also a biological cause as well. Klerman explains that our circadian rhythms change over the course of a 24-hour day. Simply put, people look at things one way during the day and in a completely different way at night.

Meanwhile, levels of negative affect — viewing things in a negative or threatening light — rise to their highest point at night.

Your risk-reward decisions are out of whack at night

Additionally, the human body produces more dopamine at night, which is a hormone tied to reward and motivation in the brain. Study authors believe this can alter the likelihood that someone engages in risky behaviors when they stay awake after midnight.

Along with circadian-influenced changes impairing a person’s decision-making, night owls start to make poorer choices based on a “mental map” that is much more negative than it is during the day. Klerman says she experienced this while suffering from severe jet lag during a trip to Japan.

“While part of my brain knew that eventually I would fall asleep, while I was lying there and watching the clock go tick tick tick—I was beside myself,” she concludes.

“Then I thought, ‘What if I was a drug addict? I would be out trying to get drugs right now.’ Later I realized that this may be relevant also if it’s suicide tendencies, or substance abuse or other impulse disorders, gambling, other addictive behaviors.”

The hypothesis is published in the journal Frontiers in Network Psychology.