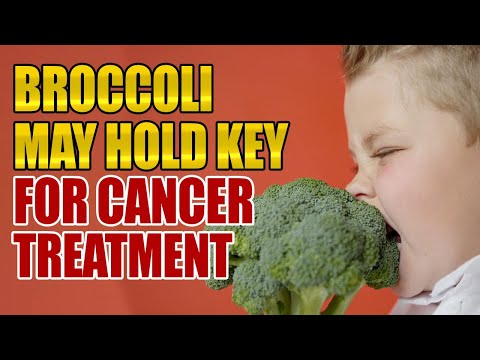 HIROSHIMA, Japan — A compound in broccoli and cabbage may help pave the way to a new cancer treatment, a new study explains. Researchers from Hiroshima University have discovered that a molecule in these vegetables breaks down into the compound 3,3’-Diindolylmethane — or DIM. What’s important about that is scientists believe the compound can induce cell death in patients with breast, prostate, and colon cancer.

The study found DIM destroys whole cells and triggers the recycling of cellular components in fission yeast. Scientists still have to prove DIM can do this in humans. However, study author Masaru Ueno explains that the results in unicellular fission yeast makes it easier for researchers to study how this process might play out in other organisms.

“We discovered that the chemical compound, DIM, induces novel biological activity that damages the nuclear membranes in fission yeast,” says Ueno, an associate professor at the Hiroshima Research Center for Healthy Aging, in a university release.

Study authors explain that the nuclear membrane surrounds a cell’s genetic information. Once a cell replicates this genetic material, the nuclear envelope pinches into two parts, creating two cells instead of one. With cell division, two cells become four, four become eight, and so on. Although this process is important for human health, problems with the membrane can also lead to serious health issues and disease onset.

“Mutations that cause defects in the nuclear membrane accelerate aging. Nuclear membranes also rupture and repair themselves during cancer cell migration,” Ueno says.

While it’s natural for cells to divide and multiply, it’s also natural for cells to die off and recycle their useful parts. This “self-eating” process is called autophagy. It allows cells to consume their internal components so they can conserve energy and live longer. However, Ueno says autophagy also has a link to both aging and age-related diseases.

If a cell can’t repair itself anymore, it ruptures in a controlled or “programmed” death which scientists call apoptosis.

Apoptosis may be the key to cancer treatment

Researchers say several anti-cancer drugs trigger apoptosis in order to destroy cancerous cells. If the team can control this programmable death, it may lead to a new breakthrough in cancer research.

“Our results suggest that the nuclear envelope could be one of the early targets of DIM,” reports study author Parvaneh Emami, a graduate student in the Graduate School of Integrated Sciences for Life.

The new findings follow up on a previous study that found high concentrations of DIM increase the lifespan of fission yeast. It may sound strange that a cell-killing compound helps an organism live longer, but Emami explains that DIM targets cells which are exponentially multiplying out of control — like cancerous tumors.

Therefore, if DIM can kill these cells, an organism will live longer.

“Recent studies in humans show that DIM is a potential anti-cancer drug that acts by the induction of apoptosis in a wide range of cancer types, including breast, prostate, gastric and pancreatic,” Ueno says.

“Research also demonstrates that DIM induces autophagy in cancer cells. However, the impact of autophagy on tumor formation and progression are not fully understood. The understanding of apoptosis and autophagy mechanism by DIM in fission yeast may be helpful for human cancer and longevity research. We think that study of the nuclear envelope structure could be a good starting point for these cases.”

Emami adds that DIM may even lead to longer lifespans.

The study is published in the journal PLOS ONE.