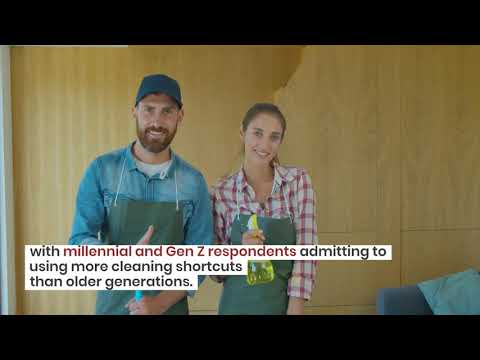 NEW YORK — Does your idea of cleaning the house revolve around spraying some good-smelling fragrances to cover up a bigger stink? It turns out the average American admits to using five different “cleaning shortcuts” while tidying up their home.

The survey of 2,000 people delved into some of these dubious shortcuts and found the most common one to be misting the room with air freshener (40%) — instead of actually cleaning dirty or stinky surfaces.

Lighting a scented candle (37%) ranks as the second most popular “cleaning shortcut.” While it may hide bad odors, it can also adversely impact the air quality in respondents’ homes. In addition to shortcuts that help mask smells, making the bed but leaving the rest of their room a mess (29%) rounds out the top three shortcuts those in the poll admit to using.

One in four add they have a closet or cupboard they use to store clutter whenever guests come over — preferring to hide the evidence rather than actually clean it up. Results show 67 percent have a cleaning schedule for their home, but less than half of those respondents “always” follow it, choosing to cut corners instead. For those who turn to shortcuts, procrastination and a lack of time to clean properly tied as the top reasons why (42%), followed by one in three (34%) simply saying they don’t enjoy cleaning.

In good news, 72 percent of all respondents say their cleaning routine has improved as they’ve gotten older. For 62 percent, they’ve stopped using as many shortcuts later in life.

Age isn’t the only thing affecting how respondents clean: six in 10 have adopted new cleaning habits — or a new routine — since the start of the COVID-19 pandemic. One-third say they’re cleaning “much more often” and 71 percent expect these new habits to last beyond the pandemic’s end.

“This past year was impactful to many, and while cleaning shortcuts aren’t going away, it is encouraging to see that amid the pandemic people are changing their habits and ditching these shortcuts for a deeper, environment-conscious clean,” says Katie Jennings, R&D manager at Seventh Generation, in a statement. “COVID-19 cleaning habits are expected to last and with them also comes an increased awareness of how one’s cleaning impacts their health and that of the environment.”

Airing out the home

Conducted by OnePoll on behalf of Seventh Generation, the survey also looked more broadly at respondents’ cleaning habits and the connection between cleaning and the air they breathe.

Not only did respondents’ cleaning habits change as a result of the pandemic, but 62 percent believe spending more time at home has made them more concerned about their indoor air quality. In order to improve the air quality in their home, respondents have dusted more in the last year (42%), increased ventilation by opening windows (36%), and used an air purifier (31%).

“Spending more time at home put a spotlight on how cleaning can impact the quality of the indoor air you breathe. The awareness that certain cleaning behaviors can impact one’s health continues to grow, making people more cognizant of a shortcut’s negative effects,” Jennings says. “A conscious and thorough clean can impact people and planet for generations to come.”