NEW BRUNSWICK, N.J. — Food preparation can be a messy business. People can easily spread bacteria from meat and poultry by touching kitchen counters, cutting boards, and household appliances. However, a new study has found an even greater threat to your health — spice containers.

A team, including a researcher from Rutgers University, says that these common kitchen containers pose a greater risk for bacterial cross-contamination when people cook. In fact, study authors found that nearly half of the spice containers in a cooking experiment had been contaminated with a pathogen while participants cooked the same meal in different sized kitchens. This was a higher rate than the amount of germs participants spread to cutting boards and trash can lids during the study.

Donald Schaffner, a Distinguished Professor in the Department of Food Science at the Rutgers School of Environmental and Biological Sciences, explains that cross-contamination is the process by which microbes move from one substance to another — typically with harmful effects.

“In addition to more obvious surfaces like cutting boards, garbage can lids and refrigerator handles, here’s something else that you need to pay attention to when you’re trying to be clean and sanitary in your kitchen,” Schaffner says in a university release. “Our research shows that any spice container you touch when you’re preparing raw meat might get cross-contaminated. You’ll want to be conscious of that during or after meal preparation.”

Researchers note that foodborne illnesses like salmonella contribute to nearly two million infections each year in the United States alone. A large number of these cases originate among USDA-regulated food products, such as beef, chicken, pork, turkey, and wild game.

The team says that proper food handling procedures, adequate cooking times, constantly washing hands, and sanitizing both kitchen surfaces and utensils can stop the spread of bacteria from uncooked food.

“The purpose of this study was to determine the prevalence and degree of cross-contamination across a variety of kitchen surfaces during a consumer meal preparation event,” says Schaffner, who also is the Rutgers Agricultural Experiment Station’s Extension Specialist in Food Science.

What do people touch in their kitchens?

During the study, researchers monitored 371 people they recruited to cook the same turkey burger recipe in several different kitchens. These areas ranged in size from small, apartment-style kitchens to larger teaching kitchens.

Each person prepared the same meal, using raw ground turkey patties, a seasoning recipe, and a prepackaged salad. To simulate the movement of pathogens across an active kitchen, the team inoculated the meat with a bacteriophage called “MS2” without the participants’ knowledge. Bacteriophages are viruses that infect bacteria, but don’t pose a threat to humans. This allowed researchers to safely trace cross-contamination without putting the cooks in danger.

Once each participant finished cooking their meal, study authors swabbed all the kitchen utensils, cleaning areas, and surfaces for the presence of the MS2 tracer. After examining those results, the team decided to swab even more surfaces, including spice containers and sink faucet handles.

“We were surprised because we had not seen evidence of spice container contamination before,” Schaffner concludes. “Most research on the cross-contamination of kitchen surfaces due to handling of raw meat or poultry products has focused on kitchen cutting boards or faucet handles and has neglected surfaces like spice containers, trash bin lids and other kitchen utensils. This makes this study and similar studies from members of this group more comprehensive than previous studies.”

The study was commissioned by the U.S. Department of Agriculture’s (USDA) Food Safety and Inspection Service.

The findings are published in the Journal of Food Protection. 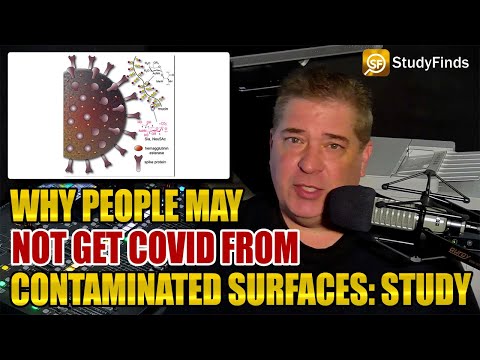 Entrepreneurs are often feverish workaholics. So what’s their secret to avoiding burnout?21 mins ago

Best Luggage For Kids In 2023: Top 5 Children’s Suitcases Most Recommended By Experts43 mins ago