BRISTOL, England — Children who catch the coronavirus typically experience mild symptoms — if any at all. One British child, however, experienced a frightening, but rare side effect now being called “COVID eye.” Nine-year-old Zac Morey spent Christmas in the hospital and almost went blind after doctors say he suffered an allergic reaction to the virus.

Studies have shown that COVID-19 can cause more than 200 long-hauler symptoms. One rare side effect from the virus seen in children called Multisystem Inflammatory Condition in Children (MIS-C) is known to cause damage to their hearts, which one study reported could have life-long effects. Additional research, however, shows that most heart issues caused by MIS-C eventually disappear over time.

“COVID toes” became well-known around the world after many patients reported swelling or rashes on their toes during the first wave of the outbreak. Now, Morey’s family says “COVID eye” is yet another side effect to look out for.

Morey lost vision in his left eye less than a week after testing positive for COVID-19. His eye completely closed up during the terrifying ordeal after he was diagnosed with orbital cellulitis, a skin infection that some scientists have linked to coronavirus.

Morey has since fully recovered from the so-called “COVID eye,” but his family is issuing a warning.

“His eye looked like it was going to explode,” his mother, Angela, tells South West News Service. “There was no way he could open it without pulling the skin. It was swollen beyond anything I’ve ever seen.”

Zac’s eye problem started after he tested positive for COVID-19, along with his mother and four siblings on December 16. The youngster suffered cold-like symptoms and spent his self-isolation period playing computer games at home.

But on December 22, when he twice tested negative for COVID, he developed pain in his left eye.

“I thought it just been on the computer for seven days solid so didn’t think anything of it,” says Angela. “But by Christmas Eve it was not good at all. We took him to hospital and he was put on an antibiotic drip until Boxing Day. They said if it goes too far into the eye then it can cause blindness. The doctors said it was an allergic reaction to the virus that affects children.”

Zac was discharged from hospital on Boxing Day, a holiday celebrated on December 26, after undergoing an eye test that confirmed his vision had fully recovered.

The World Health Organization lists red and irritated eyes as an uncommon side effect of COVID-19, while various studies have linked orbital cellulitis and coronavirus. 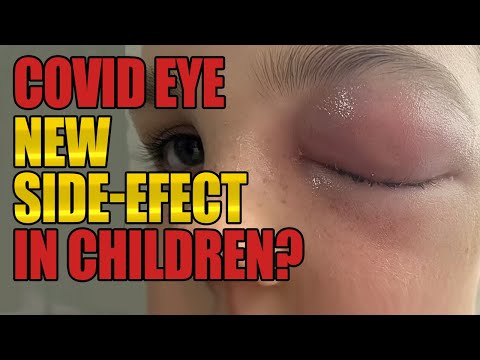