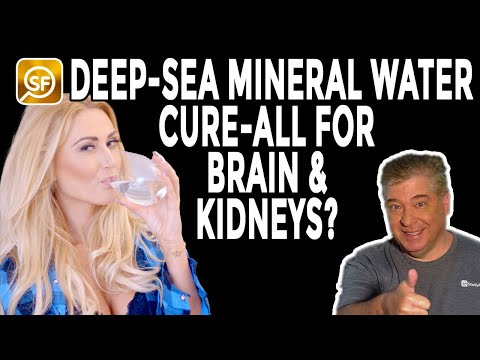 TOKYO, Japan — Just like omega-3 fish oil and avocados, a new study finds deep-sea mineral water could be the next big thing when it comes to healthy living. A team in Japan has found that drinking mineral water derived from deep-sea water (DSW) leads to several health benefits, including better brain health and better functioning kidneys.

Study authors from Shibaura Institute of Technology call DSW a “treasure trove” of minerals. It contains high amounts of potassium, calcium, and magnesium — which all provide benefits to human health. While previous studies have suggested that DSW-derived mineral water can improve our health, it’s been unclear exactly how the water benefits human health and what hardness provides the biggest boosts.

Why does water hardness matter?

Hardness refers to the amount of minerals in a glass of water. Drinking water with a high level of hardness can actually be harmful — which is why finding the right level is so important.

In Japan, deep-sea water is a common ingredient in drinking water, cosmetics, and even seasonings. Despite its widespread use, the exact reasons for its health benefits have remained a mystery. Moreover, researchers say it’s difficult to compare mineral water sources because they often have different levels of hardness.

In the new study, the team fed a group of obese mice DSW-derived mineral water, collected from off the coast of Muroto city, Kochi Prefecture. The DSW extract-added water had a hardness of either 200, 300, or 500.

Over the next two months, researchers examined how drinking the water affected the animals’ cognitive and coordinative functions. They also looked at the animals’ blood and biochemical levels to see if the water had anti-obesity properties.

“Although we did not observe an anti-obesity effect for any hardness level in the obese mice, the cognitive and coordinative functions of each DSW extract-added water-treated group were significantly improved compared to the control mice,” says study leader Professor Koji Fukui in a university release.

Study authors add that obese mice drinking the water also had significantly increased hippocampal nerve growth factor (NGF) secretion. This protein is important for the development and survival of nerve cells (neurons), including those which transmit pain, temperature, and touch sensations.

It also cleans out the kidneys!

Additionally, researchers discovered that a hardness of 300 provided higher concentrations of potassium and magnesium, without reaching unhealthy levels. These mineral levels were 11 and seven times higher than what’s in filtered tap water, respectively. At the same time, sodium levels in 300-hardness water were actually lower.

“It is important to keep sodium ion concentrations low when concentrating DSW. It is well known that high sodium levels are a high-risk factor for diabetes, high blood pressure, and cardiovascular risk,” Prof. Fukui explains.