Not sure about Dolly in the Rock & Roll Hall of Fame? Listen to the Study Finds Guy sing his plea to include the country icon in the 2022 class. 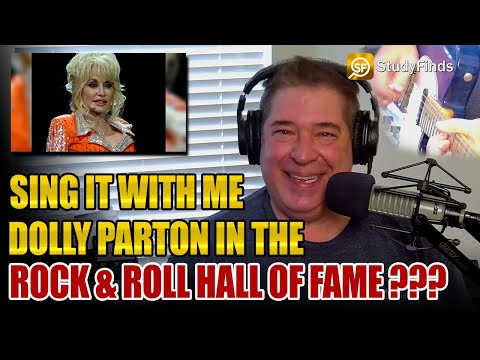 NEW YORK — At long last, millennials and baby boomers can agree on something: their love of Dolly Parton. According to a recent OnePoll survey of 1,000 Americans, roughly a third (33%) believe the legendary country songwriter deserves to be recognized by the Rock & Roll Hall of Fame.

Parton is just one of the 17 musical acts that make up this year’s Hall of Fame nominees, from which a smaller group will be selected for official inclusion. Artists become eligible 25 years after their first commercial recording, which in this case would apply to any single or album released prior to 1997.

In addition to Dolly, other first-time nominees for 2022 include A Tribe Called Quest, Carly Simon, Duran Duran, Lionel Richie, Eminem and Beck. This year also marks the second nomination for Pat Benetar, Dionne Warwick and Fela Kuti; the third for Kate Bush, Judas Priest, New York Dolls and Devo; the fourth for Rage Against the Machine, and the sixth for MC5.

Meanwhile, Gen Xers (ages 42 to 57) and Silent Generation respondents (77+) were more likely to favor Lionel Richie as their pick. Notably, both Eminem and Dolly Parton are current favorites on the official fan ballot leaderboard, which will be collecting votes until April 29.

The final Class of 2022 will be announced sometime in May and celebrated with an induction ceremony later in the year. But when asked which performers they believe the Rock & Roll Hall of Fame would actually select, only 27% feel that Dolly would make the cut.

“The Hall of Fame focuses more on top 40 hit popularity than actual quality music production and lyrics,” one respondent said.

“Some of the acts in the hall are not ‘rock,’” said another. “I’ve never even heard of a few of those bands or artists.”

Despite its name, the Hall of Fame “is no longer about a single genre of music,” according to the current Chairman John Sykes — instead, it’s meant to reflect the youthful, spirited attitude associated with rock.  “We’re in the music business, and music leads change in our culture,” the iHeartMedia executive told Rolling Stone in 2019. “Nothing stays the same in music. Therefore, really, the institution that honors it has to evolve with all the music.”

Regardless of genre, 73% of respondents believe that being part of Rock & Roll Hall of Fame is an important honor for the musicians selected. One in three (30%) also consider themselves an “expert” on the last 50 years of popular music.