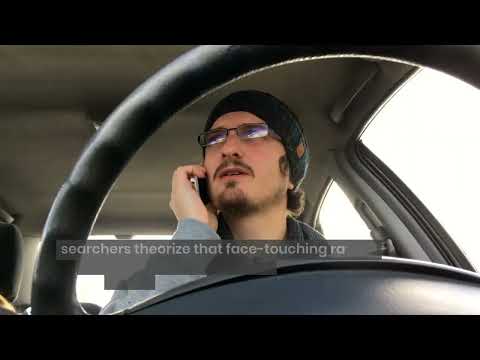 NOTTINGHAM, United Kingdom — The average driver touches their face an astounding 26 times an hour while out for a cruise, according to researchers from the University of Nottingham. If the driver in question isn’t practicing proper hand hygiene, all those picks, rubs, and scratches can spread tons of germs and infections, study authors caution.

In all, researchers analyzed 31 hours of archive video footage filmed by two on-road driving studies encompassing 36 experienced drivers for this project. The findings show that the average driver absent-mindedly touches their face 26.4 times per hour, with each touch lasting about four seconds every time. Drivers most often touched somewhere on their face (79.6%), followed by their hair (10%), neck (8.6%), and shoulders (1.7%).

Close to half the time (42.5%) drivers actually made contact with mucous membranes roughly every five minutes. The inner lining of the lips, nostrils, and eyes are all examples of mucous membranes. In most cases, drivers touched these areas with either their fingertips or thumbs, two body parts researchers say people often miss while hand washing.

All drivers get the urge to scratch

For what it’s worth, these observations and face-touching rates held up across genders and ages. Man or woman, young or old, people can’t help but touch their face while driving. Furthermore, researchers theorize that face-touching rates may actually be even higher among many drivers, especially when they’re driving alone.

“Face-touching behaviors, present a transmission risk to the driver, particularly if that vehicle is shared or occupied by multiple parties, and where hand hygiene is poor,” says study co-author Dr. David R Large, from the Human Factors Research Group, in a university release. “By scratching their nose or rubbing their eye, for example, the driver may inadvertently transfer viruses or another hazardous foreign substance – acquired from a contaminated vehicle control or surface while driving or prior to entering the vehicle – to their face.”

“Driving as a task already has a multitude of physical touch points and requires the manual manipulations of various control devices. Understanding how these are punctuated by intrinsic human behaviors such as face touching, and the potential impact these have on health and hygiene, and task-related factors, such as function and performance, is clearly important,” he continues.

Keeping hands on the wheel

It’s also worth noting that an easy drive appears to promote face-touching. The more mental and physical energy and focus a driver had to expend while driving, the less often they started scratching.

As far as how to fix this seemingly wide-spread problem, co-author Finian Ralph has a few ideas. One is to develop totally touch-free, in-vehicle surfaces and devices that react to hand movements and facial gestures. Another is to install a system in cars that will alert and remind drivers not to touch their faces.

“As such, the driver could be alerted if the system detects unusual behavior indicative of face-touching, or be provided with a pre-emptive warning, for example, during periods of low driving workload when results from our study indicate that face-touching may be higher – although it is recognized that such warnings could become annoying,” Ralph explains.

The study appears in the journal Ergonomics.