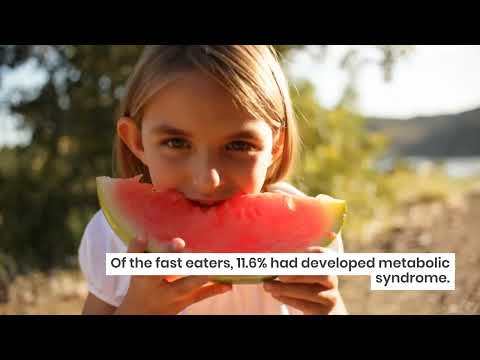 HIROSHIMA, Japan — Eating slowly gives us time to savor each bite. There is another motivating factor besides tantalizing our taste buds.

According to researchers with Hiroshima University, people who take longer to eat are less likely to become obese or to develop “metabolic syndrome,” a catch-all term for heart disease, diabetes and stroke risk factors.

“Eating more slowly may be a crucial lifestyle change to help prevent metabolic syndrome,” says Takayuki Yamaji, study author and cardiologist at the university, in a release from the American Heart Association. “When people eat fast they tend not to feel full and are more likely to overeat. Eating fast causes bigger glucose fluctuation, which can lead to insulin resistance.

Patients are considered to have metabolic syndrome when they have any three of the following risk factors: abdominal obesity, high fasting blood sugar, high blood pressure, high triglycerides and/or low HDL cholesterol.

Yamaji and his team conducted a longitudinal study over five years to determine a possible correlation between speed of eating and developing metabolic syndrome. The average age of the 1,083 participants was 51.2 years. None of the 642 men and 441 women had metabolic syndrome at the beginning of the study.

Participants were placed in one of three groups depending on how they described their usual eating speed — slow, normal or fast.

Researchers also found that participants who gobbled their food were more likely to have experienced weight gain, higher blood glucose and expanded waistlines over the course of the study.

The authors say their results are preliminary and limited to Japanese participants but they believe there is strong evidence that the chances of developing metabolic syndrome might be cut dramatically by simply eating slowly.

The study was presented at the American Heart Association’s Scientific Sessions 2017.