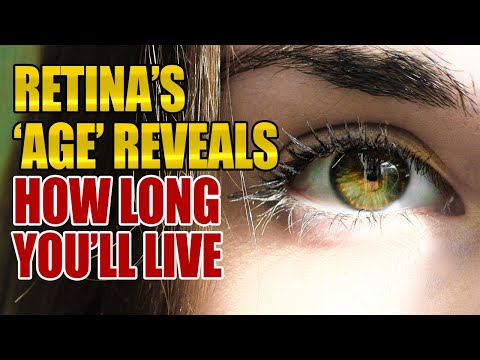 EAST MELBOURNE, Australia — A simple eye test may provide doctors with a clue into how long you have left to live. An international team has discovered a link between the biological age of a person’s retinas and their risk of death.

The membrane at the back of the eye contains light sensitive cells that begin deteriorating during middle age. A study of almost 47,000 adults found that people whose retinas were “older” than their actual age were more likely to die over the next decade.

The discovery could lead to a routine screening tool for a host of life-threatening illnesses – including Alzheimer’s disease.

“The retina offers a unique, accessible ‘window’ to evaluate underlying pathological processes of systemic vascular and neurological diseases that are associated with increased risks of mortality,” says corresponding author Dr. Mingguang He from the Centre for Eye Research Australia in a media release.

Researchers monitored the participants, all between 40 and 69 years-old, for an average of 11 years. Each person had their fundus — the back surface of the eye — scanned as part of the UK Biobank study. The international team compared each retina’s “biological age” with that person’s chronological age — discovering a “retinal age gap” in many participants.

Large gaps were associated with 49 to 67 percent higher risks of death from any cause other than cardiovascular disease or cancer. This was after taking into account potentially influential factors such as high blood pressure, body mass index (BMI), lifestyle habits, and ethnicity.

“Our novel findings have determined that the retinal age gap is an independent predictor of increased mortality risk, especially of non-cardiovascular disease/ non-cancer mortality. These findings suggest that retinal age may be a clinically significant biomarker of aging,” the researchers say.

For each one-year increase in the age gap, scientists found a two and three percent rise in the risk of death from any cause or a specific cause, respectively. The findings add to evidence that the network of small vessels in the retina are a reliable indicator of the overall health of the body’s circulatory system and brain. While the risks of illness and death increase with age, it is clear they vary considerably among people of the same age, according to the team.

Biological aging is unique to the individual and may be a better indicator of current and future health. Study authors used an advanced type of AI (artificial intelligence) known as “deep learning” to accurately predict a person’s retinal age from images of the fundus.

The new technology is different from similar tissue, cell, and chemical tests of biological aging that the study authors say are fraught with ethical and privacy issues. These tests are also invasive, expensive, and time consuming.

The team validated their screening model using some 19,200 fundus images from the right eyes of 11,052 participants in relatively good health. This showed a strong association between predicted retinal age and real age, with an overall accuracy to within three and a half years.

Dr. He says previous studies have suggested retinal imaging contains information about cardiovascular risk factors, chronic kidney diseases, and systemic biomarkers. The new findings, combined with previous research, add weight to “the hypothesis that the retina plays an important role in the aging process and is sensitive to the cumulative damages of aging which increase the mortality risk.”

“Our findings indicate that retinal age gap might be a potential biomarker of aging that is closely related to risk of mortality, implying the potential of retinal image as a screening tool for risk stratification and delivery of tailored interventions,” the study authors write in the British Journal of Ophthalmology.