Researchers from USC add that the process could even have implications for Alzheimer’s and other neurodegenerative diseases. Their study successfully filmed the memory-creating process in young zebrafish, mapping changes in their brains as they store information. Zebrafish are a popular creature in scientific experiments since they’re very similar to humans on a genetic and cellular level.

Their brain cells “lit up like Times Square on New Year’s Eve” during the experiment. Learning caused connections between neurons (synapses) to either proliferate or disappear. Synapses pass messages using chemicals called neurotransmitters.

“Our probes can label synapses in a living brain without altering their structure or function, which was not possible with previous tools,” says lead author Professor Don Arnold in a university release. 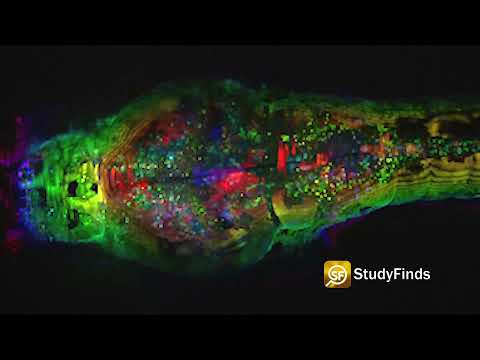 The new procedure enabled researchers to examine where the synapses were located.

“The microscope that we built was tailored to solve this imaging challenge and extract the knowledge we needed,” adds co-author Prof. Scott Fraser. “Sometimes, you try to get such a spectacular image that you kill what you are looking at. For this experiment, we had to find the right balance between getting an image that was good enough to get answers, but not so spectacular that we would kill the fish with photons.”

Why do some memories stick with us more than others?

The study, published in the Proceedings of the National Academy of Sciences also explains why some memories are stronger than others. For instance, people often remember the name of their childhood best friend, but sometimes struggle to recall the name of a person they just met.

Previously, comparisons before and after memory formation were unfeasible. The humble zebrafish is large enough to have a brain that functions like our own. It’s also small and transparent, opening a window into the organ’s mysteries.

By keeping the intact fish alive, Prof. Arnold and colleagues compared synapses over time. The 12-day-old fish were first trained to link the turning on of a light with an infrared laser heating their head. The fish sought to avoid this by swimming away. Fish that remembered this connection would flick their tails.

Five hours later, the researchers observed and recorded dramatic gains and losses in the neuronal junctions. They also altered the animals’ DNA so their strength and location was marked with a fluorescent protein that glowed under a beam.

It provided them with hundreds of before-and-after pictures of the same animal. Earlier experiments had only been possible on deceased specimens. Two different brains had to be compared, one conditioned and one not.

“This is ninja imaging, we sneak in without being noticed,” Prof. Fraser says.

Complicated algorithms processed the vast quantity of data, with the results showing no alterations in the existing synapses. Instead, some were destroyed, and others were created in another region of the brain.

“For the last 40 years the common wisdom was that you learn by changing the strength of the synapses,” explains co-author and computer scientist Prof. Carl Kesselman, “but that’s not what we found in this case.”

Age-related breakdown in synapses is a common symptom of dementia and other neurodegenerative diseases.

“This was the best possible outcome we could have had,” Arnold says, “because we saw this dramatic change in the number of synapses — some disappearing, some forming, and we saw it in a very distinct part of the brain. The dogma was that the synapses change their strength. But I was surprised to see a push-pull phenomenon, and that we didn’t see a change in synapses’ strengths.”

The results suggest changes in the number of synapses encode memories. The new findings provide a clue to why bad memories, such as those that lead to PTSD, are so robust.

“It has been thought that memory formation mainly involves remodeling of existing synaptic connections,” Arnold concludes, “whereas in this study, we found the formation and elimination of synapses, but we saw only small, random changes in synaptic strength of existing synapses. This may be because this study concentrated on associative memories, which are much more robust than other memories and are formed in a different place in the brain, the amygdala, versus the hippocampus for most other memories. This may someday have relevance for PTSD, which is thought to be mediated by the formation of associative memories.”