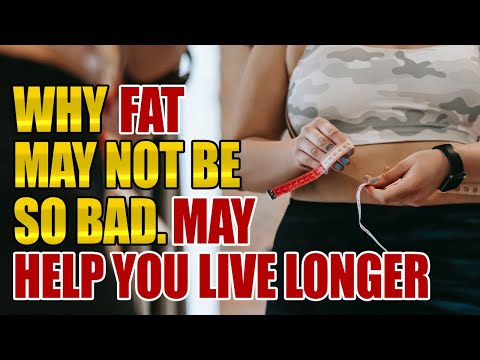 COPENHAGEN, Denmark — Fat is usually fitness enemy number one, but new research finds fat may not be so bad after all – as long as it functions well! Researchers at the University of Copenhagen report staying active and exercising regularly throughout adulthood may ensure the body’s fat continues to function properly well into old age.

It’s a common belief that fat (in many forms) is bad for you, but the truth is fat tissue (adipose tissue) plays a major role in human health. Unfortunately, as the adult body gradually ages over time, those fat tissues begin to lose their functioning capacity. Study authors say this decline in functioning fat has a link to a plethora of common medical conditions including cancer, type 2 diabetes, and obesity. In other words, it isn’t just the amount of fat on your body influencing your health, but how well that fat tissue is working.

This latest research provides compelling evidence that a lifelong exercise habit can counteract or reverse this gradual process to a certain extent, keeping fat functioning for a longer period. Researchers assessed a group of Danish men and focused on the connections between aging, exercise, and fat tissue to reach these conclusions.

“Overall health is closely linked with how well our fat tissue functions. In the past, we regarded fat as an energy depot. In fact, fat is an organ that interacts with other organs and can optimize metabolic function. Among other things, fat tissue releases substances that affect muscle and brain metabolism when we feel hungry and much more. So, it’s important that fat tissue works the way it should,” explains Assistant Professor Anders Gudiksen of the University of Copenhagen’s Department of Biology in a university release.

The research team focused on mitochondria, considered the tiny “power plants” within the cells. Mitochondria take calories from food and create energy. In order for a cell to be healthy, its mitochondria need to be functioning properly.

Study authors compared mitochondrial performance among participants of various ages. Some of the men were quite athletic and exercised habitually, while others were “moderate exercisers,” and a third group wasn’t very active at all. Importantly, the team still considered all the participants healthy, unmedicated, and displayed a BMI below 30.

Generally speaking, the results of those comparisons showed that, across the board, mitochondria gradually lose their ability to respire (produce energy) with greater age – regardless of a person’s exercise habits. However, exercise does appear to offer a “powerful compensatory effect.”

“Although mitochondrial function decreases with age, we can see that a high level of lifelong exercise exerts a powerful compensatory effect. In the group of well-trained older men, fat cells are able to respire more than twice as much as in untrained older men,” Prof. Anders Gudiksen explains.

Getting rid of free radicals is important

While creating energy, mitochondria also produce a harmful byproduct in the form of oxygen free radicals, or ROS (Reactive Oxygen Species). An unhealthy balance between ROS and antioxidants can harm cells. Many doctors and scientists theorize that high ROS levels have a link to a number of health issues such as cancer, diabetes, dementia, and heart disease. Therefore, regulating ROS could be a very important consideration here as well.

“The group of older people who train most form less ROS and maintain functionality to eliminate it. Indeed, their mitochondria are better at managing waste produced in fat cells, which results in less damage. Therefore, exercise has a large effect on maintaining the health of fat tissue, and thereby probably keeping certain diseases at bay as well,” Prof. Gudiksen adds.

Older study participants who exercised for most of their lives showed more overall mitochondria, consequently facilitating further respiration and an increased capacity to release more of the fat-related hormones integral to the human body’s balance of energy.

“Our results show that you can actually train your fat tissue to a very high degree – but that you needn’t cycle 200km a week to achieve a positive effect. What you shouldn’t do, is do nothing at all,” Prof. Gudiksen concludes.

The team says much more research is necessary on this topic. To start, researchers would like to start focusing on determining where exactly cellular damage occurs when people avoid physical activity, as well as the overall impact such developments have on the body over time.

Moreover, study authors caution these specific findings should ultimately be considered “conservative estimates.” Why? All of the participants were in generally good health and did not take medications, meaning they were not an accurate representation of the general public.

The study is published in the Journal of Gerontology.

Best Digital Picture Frames In 2023: Top 5 Displays Most Recommended By Experts46 mins ago