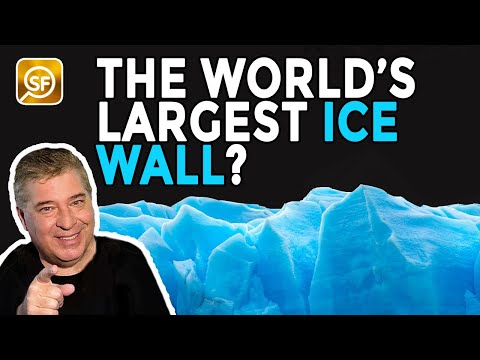 CORVALLIS, Ore. — A gigantic wall of ice may have been the first border wall in history that kept ancient humans from reaching North America. Researchers believe this icy barrier was up to 300 stories tall, which is taller than any building on the planet today! The findings may rewrite the history books and reveal how the “first Americans” actually reached the continent.

The international team, led by geologist and archaeologist Jorie Clark from Oregon State University, found evidence that this massive wall blocked off the ancient land bridge which once connected Asia and North America. Today, the continents are separated by the Bering Strait.

Until now, scientists had two basic theories about how humans first traveled from Asia to the west coast of North America. The first is that people journeyed across the land bridge, called Beringia. The second is that ancient humans used boats to travel along the Pacific coast — from Asia, to Beringia, to America.

Was this route really ice-free at the right time?

Researchers say the biggest factor in deciding which method of migration early humans likely used is the presence of giant ice sheets which covered North America tens of thousands of years ago. Previous studies have suggested that there was an “ice-free corridor” on the land mass that allowed people to walk to North America.

Ancient stone tools dating back 13,000 years further pushed the theory that the first humans in America arrived around this time. These people came from a prehistoric culture known as the Clovis.

However, other recent studies have discovered ancient footprints and even stone tools in North America which date back between 20,000 and 30,000 years. Moreover, new estimates show that the ice-free corridor (IFC) did not open up until about 15,000 years ago — meaning these early humans would have needed another route to reach the present-day United States.

“Resolving this debate over migration route is important for addressing the questions of when and how the first Americans arrived in regions south of the continental ice sheets,” the study authors write in the journal Proceedings of the National Academy of Sciences.

Did the first Americans arrive by boat, too?

The study authors examined 64 geological samples coming from six locations along a 745-mile stretch where scientists believe the IFC existed. Their findings reveal that the corridor didn’t fully open until around 13,800 years ago.

Until the path opened, the evidence points to ice sheets standing up to 3,000 feet tall covering this region. For comparison, the world’s tallest building (the Burj Khalifa in Dubai) is only 2,722 feet tall.

“The IFC was not available as a migration route for the peopling of the Americas that had occurred before ∼15.6 ka (15,600 years ago) suggested by current archaeological and ancient genomic evidence,” the researchers write in their report.

On the other hand, the study finds that ice along the coast of the massive Cordilleran Ice Sheet — which blocked off the present-day U.S. — did melt enough during this time to allow people to travel down the Pacific coast.

“We note that these first peoples would likely still have faced considerable difficulties in navigating the largely glaciated coastline,” Clark’s team concludes.