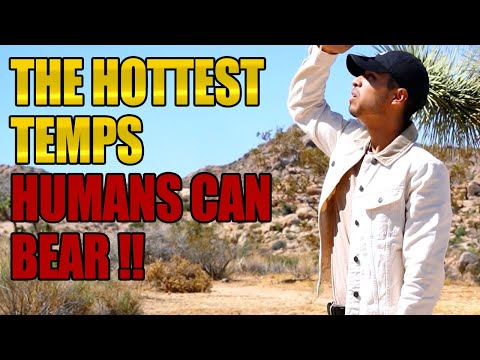 UNIVERSITY PARK, Pa. — Just how hot is too hot? Scientists have long believed the human body loses its capacity to properly regulate body temperature around 95°F (at 100% humidity), or 115°F at 50 percent humidity. Now, as climate change slowly but surely turns up the heat on our planet, scientists from Penn State find the max temperatures humans can handle may be lower than previously thought.

First, what happens if the body can’t regulate its own temperature adequately? Nothing much except a dramatic increase in heat stroke and death depending on the exposure time. This latest research finds the real max temperature humans can handle is closer to 31°C wet-bulb or 87°F at 100 percent humidity. This held true for even young, healthy individuals, suggesting the max bearable temperature for older, more vulnerable people is likely even lower.

Scientists used one particular temperature called wet-bulb temperature (WBT). This represents a humid temperature when the air holds as much moisture as possible. At this temperature, sweating — a common way to cool down the body — will not work. WBT is typically read via a thermometer with a wet wick over its bulb.

“If we know what those upper temperature and humidity limits are, we can better prepare people – especially those who are more vulnerable – ahead of a heat wave,” says W. Larry Kenney, professor of physiology and kinesiology and Marie Underhill Noll Chair in Human Performance, in a press release. “That could mean prioritizing the sickest people who need care, setting up alerts to go out to a community when a heatwave is coming, or developing a chart that provides guidance for different temperature and humidity ranges.”

Professor Kenney stresses that this form of measuring heat risk is only really useful for humid climates. In drier climates, sweat evaporates from the skin and cools the body down.

The previously agreed-upon max wet-bulb temperature of 35°C/95°F at 100 percent humidity is based on theory rather than real-world data on humans. So, researchers set out to get a better handle on the heat.

Warm-humid climates made it harder to regulate body temperature

Twenty-four people (ages 18-34) took part in this study. While study authors want to conduct further experiments with older adults in the future, they wanted to start with young adults.

“Young, fit, healthy people tend to tolerate heat better, so they will have a temperature limit that can function as the ‘best case’ baseline,” Professor Kenney notes. “Older people, people on medications, and other vulnerable populations will likely have a tolerance limit below that.”

Every participant swallowed a tiny radio telemetry device (yum!) inserted into a capsule. Throughout the experiment, the device measured a person’s core temperature. After that, each person entered a “specialized environmental chamber” with adjustable temperature and humidity settings. While subjects performed some light physical exercise, the chamber either gradually increased in temperature or in humidity until the person could no longer maintain their core body temperature.

“Our results suggest that in humid parts of the world, we should start to get concerned — even about young, healthy people — when it’s above 31 degrees wet bulb temperature,” Prof. Kenney concludes. “As we continue our research, we’re going to explore what that number is in older adults, as it will probably be even lower than that.”

However, the team cautions that no two bodies are exactly the same and that every human may adapt to heat differently depending on humidity levels. Thus, it’s likely impossible to settle on one single, absolute max temperature humans can endure across all environments on our planet.

The study is published in the Journal of Applied Physiology.