VIENNA, Austria — How do you pour from a teapot without dripping and ruining the tablecloth? It’s a question scientists may finally have an answer to. Researchers from Vienna University of Technology say the pourer must get the force and angle just right to avoid dripping.

Explaining the so-called “teapot effect” – first described by Markus Reiner in 1956 – has proven scientifically challenging for decades. The effect refers to the complex fluid dynamics which make pouring liquids from teapots without spillage a delicate process.

If poured too slowly, the flow can dribble down the outside of the teapot rather than detaching itself from the spout and landing in the mug.

Avoiding drops on the beak

Now, scientists have crunched the numbers and come up with a detailed explanation for this deceivingly complicated phenomenon ​which has been threatening spotless white tablecloths for ages. 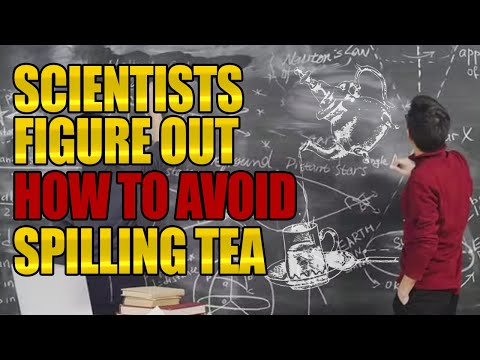 “Although this is a very common and seemingly simple effect, it is remarkably difficult to explain it exactly within the framework of fluid mechanics,” says study author Dr. Bernhard Scheichl in a university release.

Researchers carried out experiments where they poured water from a tilted teapot at different flow rates and filmed the results with high-speed cameras. They also used complicated mathematical formulas to calculate three different forces – inertia, viscous, and capillary – which underpin the so-called teapot effect.

While the inertia force ensures the poured liquid maintains its original direction, the capillary forces slow the fluid down right at the teapot’s beak. A drop formed on the underside of the teapot beak, the size of which depended on how quickly the liquid was flowing.

If the speed was below the “critical threshold,” the drop redirected the entire flow around the edges and down the sides of the teapot. Dr. Scheichl adds the sharp edge on the underside of the teapot beak plays a most important role. A drop forms and the area directly below the edge always remains wet.

“We have now succeeded for the first time in providing a complete theoretical explanation of why this drop forms and why the underside of the edge always remains wetted,” Scheichl explains.

Teapot effect would even happen on the Moon?

Only when the pot’s wall is at a very specific angle in relation to the liquid’s surface does the mysterious effect start. The smaller the angle, the harder it becomes for the liquid to detach itself from the teapot’s spout.

Depending on what the teapot is made of and how hydrophilic (water attractive) the material is, the chances of spillage can vary. Other forces, like the strength gravity, determined what direction the liquid goes, but did not influence the teapot effect.

Researchers say the teapot effect would therefore also take place when drinking tea on a moon base, but not on a space station with no gravity at all. In this way, it’s possible to show exactly how the wetting of the edge below a critical pouring rate leads to the “teapot effect.”

The findings are published in the Journal of Fluid Mechanics.