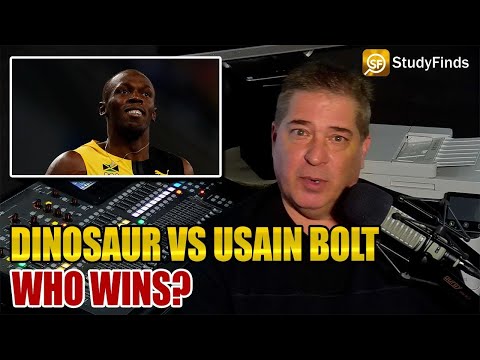 WASHINGTON — Usain Bolt set the world record (9.58 seconds) for the 100-meter sprint in 2009 and is the fastest man in the world. But, how would he fare in a race against a 900-pound dinosaur (Dilophosaurus wetherilli)? Scott Lee, a Physics Professor at the University of Toledo, recently posed this question to his students.

It may seem like a silly question to ponder at first, but Professor Lee explains that creating an outlandish scenario like man versus dinosaur is a great way to spark students’ imaginations and improve overall class engagement. The physics students must employ a complex combination of 1D kinematics — displacement, velocity, speed, and acceleration, using spreadsheets to answer the riddle.

“One big issue in physics education is to generate student enthusiasm for the course material,” Lee says in a statement. “These dinosaur problems really spark a lot of interest among the students.”

So, who would come out on top? Ultimately, the science largely suggests Bolt would take advantage of Newton’s second law of motion and his own acceleration to beat out the dinosaur by two seconds.

Professor Lee’s unique approach to teaching physics can be traced back to his childhood. As a boy, he discovered fossils with his family. Later on, he found an “approachable book” on dinosaur motion physics with his daughter. Prof. Lee put together an entire general education course for non-science majors focusing on dinosaurs with that book in hand.

“A number of physics majors have, over the years, taken this general education course just because they think dinosaurs are so cool,” he explains. “I then realized that physics majors would be excited to work on dinosaur examples of physics principles.”

Of course, there are tons of different dinosaurs, and some are much faster than others. He had to find the right dinosaur for his academic riddle to work. If you’re unfamiliar with the Dilophosaurus genus, you can find it in the original Jurassic Park film. Although, the dinosaurs incorrectly had a rattling neck frill and venom in the film.

“The maximum running speeds of the other dinosaurs were significantly different from Usain Bolt’s average speed and, therefore, would not make an interesting race,” Prof. Lee explains. “Sadly, the more famous Tyrannosaurus rex is believed to have been slower than Usain Bolt.”

To arrive at the correct answer, students have to consider Newton’s second law of motion, which states acceleration is determined by mass plus force. So, Mr. Bolt’s much smaller size would give the runner an early advantage.

After agreeing on the hypothetical race’s winner, students discussed similar speed assessments and their implications regarding physics. For example, how a lioness uses her acceleration to catch and kill faster prey. In conclusion, Prof. Lee hopes these outside-the-box teaching tactics help more students get excited about physics.

The study is available to read in The Physics Teacher.