“The find has been absolutely fascinating and a real career highlight, it’s great to learn so much from the discovery and to think that this amazing creature was once swimming in seas above us and now once again Rutland Water is a haven for wetland wildlife albeit a little smaller!” says Joe Davis, the conservation team leader at Leicestershire and Rutland Wildlife Trust and discoverer of the fossil, in a university release.

“Not only is it the largest ichthyosaur skeleton ever found in Britain, but it is also the most complete skeleton of a large prehistoric reptile ever discovered in the UK. And yes, that includes dinosaurs!” adds Dr. Dean Lomax, a paleontologist from the University of Manchester.

Dr. Lomax says Britain is the “birthplace of ichthyosaurs” and their fossils have been found around the country for more than two centuries. Davis’ team discovered this new sea dragon in January 2021. An expert team of paleontologists, led by Dr. Lomax, carefully excavated the huge skeleton in August and September.

Ichthyosaur is not a ‘swimming dinosaur’

Study authors say these prehistoric sea dragons are actually reptiles who went extinct about 90 million years ago. The fossil Davis found is approximately 180 million years-old and is over 32 feet long. Its skull alone weighs about one ton (2,000 pounds) — easily making it the largest ichthyosaur discovery in British history!

“I’ve been studying the Jurassic fossil reptiles of Rutland and Leicestershire for over twenty years. When I first saw the initial exposure of the specimen with Joe Davis I could tell that it was the largest ichthyosaur known from either county. However, it was only after our exploratory dig that we realized that it was practically complete to the tip of the tail,” says Dr. Mark Evans of the British Antarctic Survey.

“In the 1970’s, when Rutland Water was being constructed, two partial, but much smaller ichthyosaur skeletons were found, so finding another of these Jurassic marine reptiles was not totally unexpected, but the size of the new find was a total surprise.” 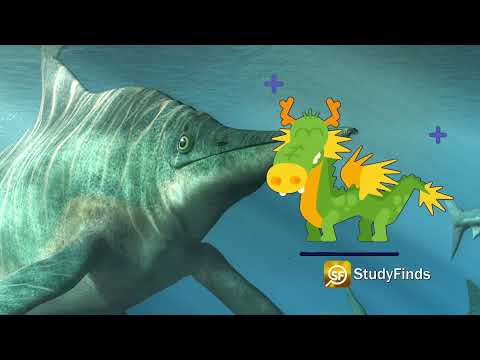 Researchers note that where they found the fossil comes as a bit of a shock too, since Rutland is a landlocked area of the U.K. Most ichthyosaur discoveries typically occur near the coastlines.

“If our identification of the ichthyosaur is correct, as a species called Temnodontosaurus trigonodon, this will provide new details on the geographic range of the species as it hasn’t been confirmed from the UK before,” notes Dr. Evans.

Of the large ichthyosaurs unearthed in the U.K., most are in generally poor condition and have poor records detailing their origins. Study authors say this makes the new sea dragon fossil that much more important for paleontologists.

“To put this find into context for the public. In the world of British paleontology, the discovery is like finding a complete Tyrannosaurus rex out in the Badlands of America, only this Jurassic giant was found in a nature reserve in Rutland, of all places! It is a truly unprecedented discovery and one of the greatest finds in British paleontological history,” Dr. Lomax says.

Along with the fossil, the team also found an entire ecosystem of Jurassic creatures from that time period. The Jurassic clay around the ichthyosaur contained microscopic fossils of hundreds of squid-like ammonites and belemnites, nautili, gastropods, and shellfish. The vertebrae of several other ichthyosaurs were found at the site as well.