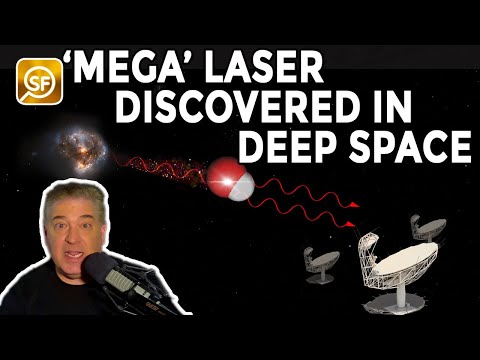 PERTH, Australia — It may not be an alien “death ray” like in a science-fiction movie, but astronomers say they have found a powerful laser emanating from deep space. For the first time ever, the MeerKAT telescope in South Africa spotted and recorded the powerful new radio-wave laser, which scientists call a megamaser.

While astronomers have seen other megamasers before, this one is by far the most distant. Scientists estimate it’s about five billion light years away from Earth. That means the light emitted from the megamaser had to travel roughly 58 thousand billion billion (58 followed by 21 zeros) kilometers to reach Earth. What a journey!

An international team of astronomers led by Dr. Marcin Glowacki made the incredible discovery. Currently based at the Curtin University node of the International Centre for Radio Astronomy Research (ICRAR) in Western Australia, Dr. Glowacki previously operated at the Inter-University Institute for Data Intensive Astronomy and the University of the Western Cape in South Africa.

So how does a megamaser come about in the first place?

Researchers explain megamasers usually appear as a result of two galaxies violently colliding in the universe.

“When galaxies collide, the gas they contain becomes extremely dense and can trigger concentrated beams of light to shoot out,” Dr. Glowacki explains in a media release. “This is the first hydroxyl megamaser of its kind to be observed by MeerKAT and the most distant seen by any telescope to date.”

“It’s impressive that, with just a single night of observations, we’ve already found a record-breaking megamaser. It shows just how good the telescope is,” the astronomer adds.

Incredibly, the team discovered Nkalakatha on the first night of a MeerKAT telescope project encompassing over 3,000 hours of observations. Talk about beginner’s luck.

Today, researchers continue to use MeerKAT to explore deep and narrow regions of the sky that have remained shrouded in mystery up until now. The team is also measuring atomic hydrogenin galaxies from the distant past to the present. This combined emphasis on hydroxl masers and hydrogen will help scientists form a stronger grasp on how the universe has evolved over time.

“We have follow-up observations of the megamaser planned and hope to make many more discoveries,” Dr. Glowacki concludes.

The study is published in The Astrophysical Journal Letters.

Best Places To Live In America In 2023: Top 5 Cities Most Recommended By Experts16 mins ago

What’s the safest seat on a plane? Unfortunately it’s the least popular one50 mins ago