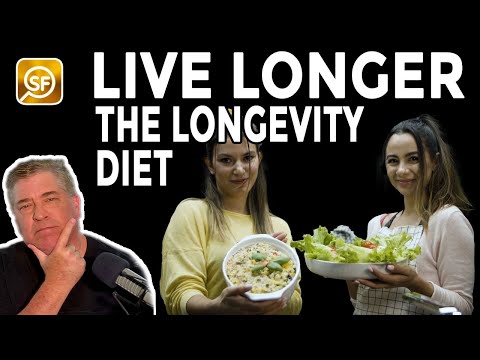 LOS ANGELES, Calif. — Fad diets are a dime a dozen these days, but researchers at USC say they’ve finally put one together that has everything you need to live a long and healthy life. Their “longevity diet” favors fish and plant-based proteins, and even welcomes a good amount of carbs, while avoiding red and processed meats.

This diet also requires people to eat their meals within a certain time frame and allow time for periods of fasting. Dieters looking to follow a healthy diet have no shortage of options these days, with most of these plans focusing on cutting carbs and calories. However, it’s been unclear if these diets help people actually stay healthy and live longer.

Now, the USC team has found that it’s not only about what people eat, but also when they eat it.

“We explored the link between nutrients, fasting, genes and longevity in short-lived species, and connected these links to clinical and epidemiological studies in primates and humans – including centenarians,” says Professor Valter Longo in a university release.

“By adopting an approach based on over a century of research, we can begin to define a longevity diet that represents a solid foundation for nutritional recommendations and for future research.”

The researchers reviewed hundreds of studies on nutrition, diseases, and long life, involving both animals and humans, and combined them with their own research. Their analysis included a wide range of calorie-cutting diets such as the popular keto diet, as well as vegetarian, vegan, and Mediterranean diets. It also looked at various forms of fasting, including cutting out food intermittently or over longer periods of time — sometimes for two or more days several times a month.

The team found several factors linked to living longer and certain illnesses, such as insulin, cholesterol, and certain protein levels. Overall, study authors believe the secret to living longer is eating a moderate to high amount of carbohydrates from unrefined sources.

Also, getting the right amount of protein and enough fats from plant-based sources can provide about 30 percent of a person’s energy needs. Ideally, a person’s meals would take place within an 11 or 12-hour window, allowing for a daily period of fasting. A five-day cycle of fasting or fasting-mimicking diet every three to four months could also maintain healthy insulin levels and blood pressure, the study finds.

So, what’s in the longevity diet?

Their new menu resembles Mediterranean diets, found in so-called “Blue Zones” like Sardinia in Italy, Okinawa in Japan, and Loma Linda in California. These diets are usually plant-based with some seafood and relatively low in protein.

The researchers’ diet adds to this by also providing time frames for meals and fasting periods which people can adapt to fit their sex, age, health status, and genetics. For example, people over age 65 benefited from more protein to counter the loss of lean body mass and frailty. Next, the researchers are planning on carrying out a 500-person study using the longevity diet in southern Italy.

Study authors suggest anyone looking to follow the longevity diet should work with a healthcare provider to come up with a plan which focuses on making small changes. This is because making drastic changes can be harmful, causing major loss of body fat and lean mass. Moreover, people often put the weight back on once they abandon a highly restrictive diet.

“The longevity diet is not a dietary restriction intended to only cause weight loss but a lifestyle focused on slowing aging, which can complement standard healthcare and, taken as a preventative measure, will aid in avoiding morbidity and sustaining health into advanced age,” Prof. Longo concludes.

The findings are published in the journal Cell.