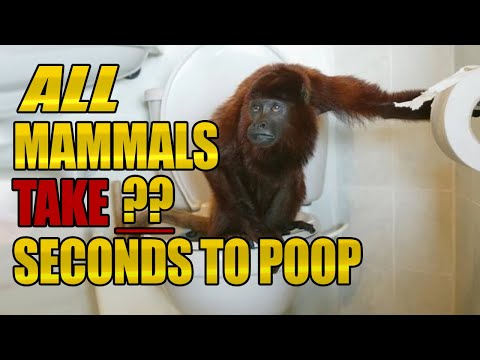 ATLANTA — Not only does everybody poop, but everybody poops in the same amount of time, apparently. Yep, there’s a study for this: researchers reveals that all mammals take 12 seconds to poop. (That includes you.)

It may seem like a silly subject to study, but researchers at Georgia Tech note that their discovery is significant because the amount of time it takes to defecate was the same for all mammals — despite some having much longer rectums that others. To put that in perspective, an elephant’s rectum, at 40 centimeters long, is 10 times the length of a cat’s.

Which led the authors to ask, how is the duty done in the same amount of time?

The slimy substance covers the lining of the large intestine, the team discovered, and in larger animals they found there’s a much thicker layer of mucus to help move the feces through the body than in smaller animals. So while it still winds up taking larger animals 12 seconds to complete the process (and even though animals use the same amount of pressure to squeeze), their excrement is actually moving faster.

Thankfully, the research paper better explains the process of mucus aiding feces by comparing it to  “a sled sliding through a chute.”

The researchers say this is important because it’s entirely possible that without this newly-discovered mucus lining, pooping might not be possible.

“Talking about, let alone studying, defecation is taboo. But that’s to the detriment of our society because we don’t have a good physical understanding of digestion or defecation,” says one of the study’s co-authors, Dr. David Hu, associate professor of mechanical engineering and biology, and adjunct associate professor of physics, in a statement. “As clinicians, I think we underappreciate the role of mucus within the intestinal tract. We know it’s there, but few studies have paid much attention to it. This study demonstrates a physical, and mathematical, reason why it’s there.”

Hu says the mucus discovery could be quite beneficial in studying and better understanding related illnesses.

“If mucus plays a role in normal physiology of defecation, which this study shows, then abnormalities in mucus may play a role in abnormal physiology. This possibility is intriguing and could expand our current understanding of how gastrointestinal disorders, like constipation or infectious colitis, may occur,” he says.

He points to constipation as one example. When a person experiences the painful condition, it signals that the individual is actually showing a deficiency in the mucus found in tract.

“If we think that mucus is playing a role, then could we develop new treatment strategies based on medications, including enemas or oral agents, that more closely resemble mucus? These possibilities would be novel,” he says.

In 2015, Hu and his lab earned a Nobel Prize for Improbable Research after discovering that all mammals urinate in the same length of time.

The study is published in the journal Soft Matter.

This article was originally published on April 29, 2017.

Best Places To Live In America In 2023: Top 5 Cities Most Recommended By Experts8 mins ago