STANFORD, Calif. — Marijuana may be giving users the wrong kind of high. A new study warns that people smoking the drug more than once a month have a higher risk of heart disease and heart attack. Researchers from Stanford Medicine say THC, the psychoactive component in marijuana that gives off the feeling of “being high,” damages the cells that line the heart walls and causes inflammation in the blood vessels.

“As more states legalize the recreational use of marijuana, users need to be aware that it could have cardiovascular side effects,” says Joseph Wu, MD, PhD, professor of cardiovascular medicine and radiology and the director of the Stanford Cardiovascular Institute, in a university release.

“But genistein works quite well to mitigate marijuana-induced damage of the endothelial vessels without blocking the effects marijuana has on the central nervous system, and it could be a way for medical marijuana users to protect themselves from a cardiovascular standpoint.”

There is a potential remedy

Researchers found a small molecule found in soy and fava beans called genistein could block marijuana-induced inflammation and atherosclerosis. Since genistein cannot cross the blood-brain barrier however, it does not cancel out THC’s other effects — stimulating appetite, relieving pain, and blocking nausea — which are appealing to medical marijuana users.

THC is a controlled substance in the United States, and it remains unclear what the long-term effects are with regular use.

“Marijuana has a significantly adverse effect on the cardiovascular system,” says Mark Chandy, MD, PhD, an instructor of medicine at Stanford Medicine. “As more states legalize marijuana use, I expect we will begin to see a rise in heart attacks and strokes in the coming years. Our studies of human cells and mice clearly outline how THC exposure entities a damaging molecular cascade in the blood vessels. It’s not a benign drug.”

3 hours of smoking marijuana can inflame the heart

The research team studied genetics and the medical history of 500,000 people between the ages of 40 and 69 in the UK Biobank. Of the 500,000 people in the study, 35,000 admitted to smoking cannabis at least once. About 11,000 smoked more than once a month. People who smoked more than once a month were more likely to have a heart attack, especially before the age of 50 in comparison to non-users.

Three hours after smoking, the team found an increase in inflammatory molecules in the blood of marijuana users. Further analysis showed that THC increased inflammation and other features associated with atherosclerosis in human endothelial cells.

Using mice bred to have high cholesterol from a high-fat diet, the team observed larger atherosclerosis plaques after injecting mice with THC levels similar to one marijuana cigarette per day.

Since THC binds to the CB1 receptor, the research team’s next step was to find an antagonist for CB1. Chronic marijuana use can cause overactivation of CB1, which contributes to inflammation and atherosclerosis. However, past attempts to stop this have proved unsuccessful as blockage led to psychiatric side-effects such as mood disorders and anxiety.

How does genistein prevent heart problems?

The study authors screened a large database of protein structures to find molecules similar to CB1 antagonists that could block THC’s inflammatory and atherosclerotic properties without the psychiatric side-effects. Their search led them to genistein in soybeans. which binds to CB1 but has poor brain penetration. When they inserted the genistein molecule into THC-treated human endothelial cells or THC-injected mice with high cholesterol, they found genistein blocked marijuana’s cardiovascular effects without causing psychoactive properties.

“We didn’t see any blocking of the normal painkilling or sedating effects of THC in the mice that contributes to marijuana’s potentially useful medicinal properties,” Dr. Chandy explains. “So genistein is potentially a safer drug than previous CB1 antagonists. It is already used as a nutritional supplement, and 99% of it stays outside the brain, so it shouldn’t cause these particular adverse side effects.”

The study is published in the journal Cell. 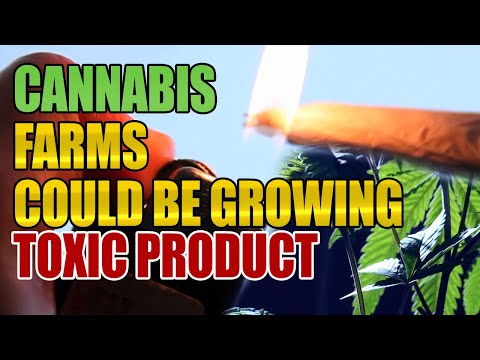