OTTAWA, Ontario — Marijuana legalization is still under fierce debate in the United States, but in Canada it’s the law of the land. While that’s great news for recreational users in the country, a new study reveals some concerning news for young children. Researchers found that accidental overdoses and emergency department visits for cannabis exposure are going up among children under the age of 10.

Moreover, the study finds the number of children overdosing on marijuana increased the most after Canada legalized the recreational use of edibles. Overall, emergency departments in Ontario saw nine times more cases a month after the country lifted regulatory restrictions. 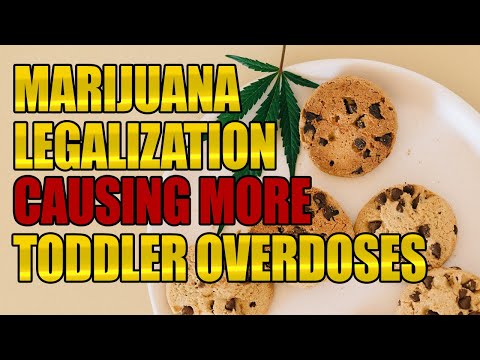 After cannabis sweets, chocolates, and other edibles became available in January 2020, there were almost 23 overdoses a month, compared to 2.5 pre-legalization.

“Canada’s approach to legalization was intended to prevent increases in child cannabis poisonings through policies limiting the strength of cannabis edibles, requiring child resistant packaging and education for parents and caregivers,” Dr. Myran continues. “Unfortunately, the rates we saw in our study suggest the approach has not met that goal.”

Some cannabis edibles often look like normal candy and come in packages resembling actual products for children, but with slightly altered names and graphics. However, these products contain THC (tetrahydrocannabinol), the psychoactive chemical in marijuana that creates the “high” feeling.

In children, this chemical can cause heart palpitations, anxiety attacks, vomiting, and even hallucinations. In Canada, lawmakers legalized flower-based cannabis products and oils in October 2018. Commercial cannabis edibles became available to buy almost a year later, just prior to the COVID-19 pandemic.

Researchers found emergency room visits for pediatric poisonings of any other cause decreased in Ontario during the pandemic, but those due to cannabis rose. After commercial edibles became available, nearly 10 percent of all hospital visits for poisonings in children in Ontario were related to cannabis.

“As more places around the world consider legalizing recreational cannabis, we need to learn how to better protect children from cannabis poisoning,” Dr. Myran says.

“More education is a start, but we may need to consider other measures to reduce cannabis edibles’ appeal to young children, such as much stricter limits on what edibles can look and taste like after they are removed from their packaging.”

During the entire study, from January 2016 to March 2021, there were 522 emergency room visits for cannabis poisoning in children under 10. However, the average age of these children was just three years and nine months. While there were no deaths, 171 (33%) required hospitalization and 19 (3.6%) needed intensive care.