LONDON — Breakups are never easy, but a new study finds they may also be bad for a man’s health as well. Researchers in Denmark found that men who experience more relationship breakups and live alone longer have higher levels of inflammatory markers in their blood. It’s a problem that could increase a person’s risk of poor health and even death.

A team from the University of Copenhagen says studies often examine the link between poor health and loneliness due to the end of marriages or long-term relationships. This study looked at what happens when “serial daters” regularly break up with their partners and end up living alone for long periods of time.

For people in committed relationships, previous studies show divorce, the death of a spouse, and loneliness contribute to a higher risk of poorer mental and physical health, lower immunity, and death.

The new study looked at health and relationship data on 4,835 men and women from the Copenhagen Aging and Midlife Biobank (CAMB) study. These individuals were all between the ages of 48 and 62, with two-thirds being men. Each person reported on the years they lived alone between 1986 and 2011, with researchers defining anything under one year alone being very common and normal. 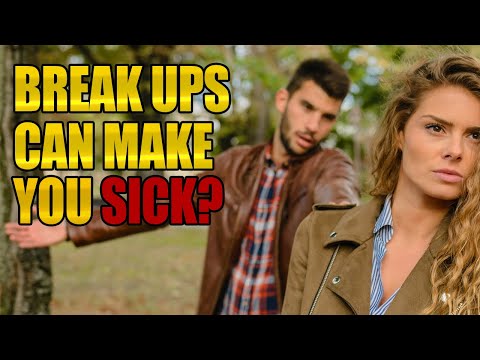 They also separated participants into groups living alone for two to six years and those being alone for over seven years. Only 83 participants reported suffering a relationship breakup in the past due to the death of their partner.

Living alone is worse for men

After accounting for potentially influential factors like age, educational background, weight, and medication history, the results show men with the most amount of partnership breakups have the highest levels of inflammation. Compared to people living alone for less than a year, men who break up the most had 17 percent more inflammation according to their blood samples.

Inflammatory markers were also 12 percent higher among participants who spent the most years living alone. Specifically, the team looked at two key blood markers, interleukin 6 (IL-6) and C-reactive protein (CRP). Results show men with high levels of education who lived alone for two to six years had the highest levels of CRP in their blood. Meanwhile, men living alone for over seven years had the highest levels of IL-6.

Interestingly, researchers only found these warning signs among men, not women.

Study authors believe part of this is due to the way men and women react after breaking up with a significant other. Researchers claim men tend to externalize their behavior after a breakup, turning to habits such as drinking more alcohol. Conversely, study authors say women internalize more after a breakup, experiencing more depressive symptoms.

These behaviors may contribute to inflammation levels following a breakup, study authors say, but the relatively small number of women in the study (1,499) may also be a reason for the differing results. The team also notes their findings are only observational, and they can’t determine an exact cause for the higher inflammation levels in men.

Another possibility is that men tend to generate a stronger inflammatory response than women of the same age. Scientists believe low-grade inflammation plays a key role in the development of age-related diseases, such as cancer, heart disease, and type 2 diabetes.

“Small numbers of breakups or years lived alone is not in itself a risk of poor health, but the combination of (many) years lived alone and several break-ups is in our study shown to affect both CRP and IL-6 levels significantly,” the researchers write in a media release.

“The levels of inflammation in our study are low, but they are also significant, clinically relevant, and most likely a risk factor for increased mortality,” the team continues.

“Since the number of one-person households has been increasing throughout the past 50–60 years in most high-income countries, this group of people going through relationship break-ups, or who are living on their own for different reasons, are part of at-risk groups.”

The findings are published in the Journal of Epidemiology & Community Health.