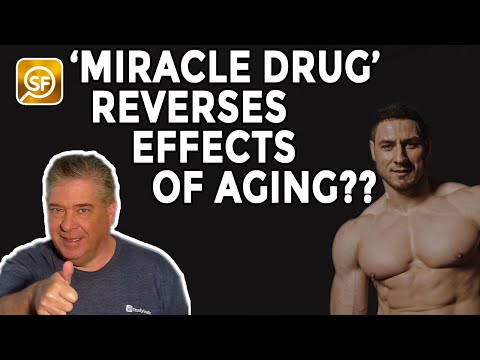 BATON ROUGE, La. — A “fountain of youth” pill could be on the horizon as scientists say they have found a chemical compound that reverses the effects of aging and obesity in mice.

Researchers from the Pennington Biomedical Research Center found that BAM15 had a significant impact on the health of older and obese rodents. The animals shed weight, gained muscle strength, and increased their physical activity after taking the substance — which scientists call a mitochondrial uncoupler. The compound even turns fat back into muscle, reduces inflammation, and may combat frailty.

“Loss of muscle mass is typically not a concern in younger adults with obesity. However, as people age, that changes. Older adults with sarcopenic obesity suffer accelerated muscle loss. They become less active. As a result, they are at high risk for falls, stroke, heart disease, poorer quality of life and premature death,” says lead author and exercise physiologist Dr. Christopher Axelrod in a media release.

Sarcopenic obesity leads to age-related muscle loss, along with an increase in fat tissue. However, the new treatment offset this weakness in older mice — who were the equivalent of a 60 to 65-year-old person. Each mouse was also eating a high-fat diet to promote obesity.

“Typically, when you lose weight, you also lose muscle, and in some circumstances, you can lose a lot of it,” Axelrod explains. “In this study, the aged mice increased their muscle mass by an average of 8 percent, their strength by 40 percent, while they lost more than 20 percent of their fat.”

The study has important implications for improving the quality of life for older adults. In particular, it could help the rapidly growing number of overweight individuals lose weight and improve their overall health. Preventing, delaying, or reversing the causes and consequences of sarcopenic obesity is a medical “holy grail” — which would allow millions to live longer and healthier lives.

The study also found the medication replaced damaged mitochondria and reduced inflammation linked to muscle loss — key factors in healthy aging. Researchers caution that it’s still too early to know if this “miracle drug” will have the same impact on humans. However, the early results in mice are promising.

“Extending health span is even more important than extending lifespan,” Kirwan concludes. “Suppose you could add 20 or 30 years to a person’s life. What would be the point if their quality of life was awful?”

The findings are published in the Journal of Cachexia, Sarcopenia and Muscle.