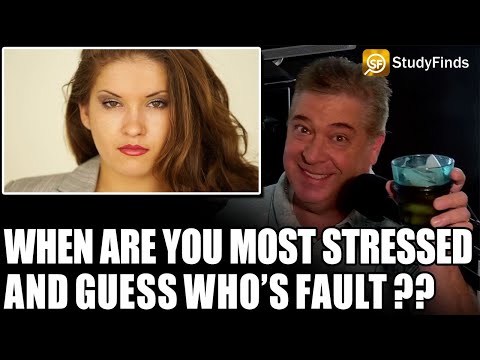 WASHINGTON — It’s safe to say that many people can’t stand Mondays, and a new study reveals that there’s a very good reason for that. It turns out Monday evening is when women reach “peak stress” during their week. As for men, they actually face the most stress on Friday nights!

In a study commissioned by foodtech startup myAir, researchers found that American women are the most stressed out on Mondays and Tuesdays at 7 p.m. Meanwhile, the average American man hits this same point on Fridays at 8 p.m.

The analysis of more than 200,000 days and nights and 16 billion data points also shows that, on average, women are five percent more stressed than men. Despite feeling the strain more than men, women still fall asleep about 10 percent faster than their male counterparts and also get an additional 21 minutes of sleep each night.

As for where in the United States people are feeling the stress of the last two years building up, a new study by WalletHub finds the south is a tough place to be right now. Louisiana ranks as the most stressed in the nation, followed by Nevada, New Mexico, West Virginia, and Mississippi.

Rounding out the top 10 most stressed states in the U.S. are Arkansas (6th), Oklahoma (7th), Alabama (8th), Texas (9th), and Tennessee (10th). A deeper dive into the results reveals that Americans in Alaska (16th) have the most work-related stress right now. This measure looked at factors such as hours worked, average commuting times, job security, and local unemployment rates.

It turns out Alaskans work the highest number of hours each week, a dubious honor they share with workers in North Dakota, Texas, and Wyoming. Oddly enough, that doesn’t mean these Americans are also getting the least amount of sleep. The study finds residents in Hawaii actually sleep for the fewest number of hours each night — despite finishing as the sixth-least stressed state in the country (45th overall).

So, what are Hawaiians doing all night while they’re not sleeping? Researchers say they may be up all night looking for a cheaper apartment! Although Hawaiians live in one of the least stressed states, they also have the most expensive housing in the nation — even more expensive than homes in California (2nd) and New York (3rd).

As for what’s bringing the most stress to Americans, crime, lack of help, and lack of funds are all major factors. Louisiana, the nation’s most stressed state, ranks at the bottom when it comes to crime rate and the fewest number of psychologists working in the state. Louisiana also had the second-highest poverty rate, while residents there had the second-lowest credit scores in the nation.

So, what can people do to address the financial stress the pandemic is causing?

“First, I want to acknowledge that the range of financial stress is huge right now and some people are really hurting. I would…encourage doing a lot of research about COVID19 financial relief opportunities. It is an active and ongoing situation, and there have been several federal, state, and local government financial assistance opportunities but it takes a lot of knowledge and awareness of what is out there – not an easy task when you are under duress,” says Arizona State University associate professor Alisia (Giac-Thao) Tran in a statement.

“So, I recommend finding a starting point, asking for help, and doing what you can to maintain your focus on the financial tasks that arise from the process so you do not get overwhelmed in the process – that would certainly be the opposite of what we are going for.”

Notes: *No. 1 = Most Stressed
With the exception of “Total Score,” all of the columns in the table above depict the relative rank of that state, where a rank of 1 represents the worst conditions for that metric category.