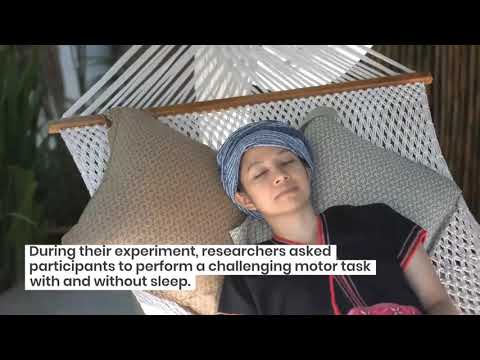 EVANSTON, Ill. — Napping can help many people feel refreshed and recharged during a long day. Now, a new study is adding evidence to the belief that a quick “power nap” really does help the body and mind. Researchers at Northwestern University say napping for just 90 minutes can boost both motor skills and memory.

The team finds that sleep can enhance a person’s ability to learn challenging motor tasks since it helps the brain to process and focus on the new skill. After a short sleep, study participants were able to perform more quickly and more efficiently than if they did not have the extra rest.

During their experiment, researchers asked participants to perform a challenging motor task with and without sleep. Volunteers played a computer game that asked them to move a cursor by using specific arm muscles.

Study authors paired each command to move the cursor in a particular direction with a unique sound. After practicing, the participants played the game blindfolded and moved the cursor based on the corresponding sounds alone.

Some participants then took a 90-minute nap and were able to perform the motions better than those who did not. Northwestern PhD graduate Larry Cheng says the team believes the approach could enhance rehabilitation therapies for stroke patients and other neurological disorders.

“We used targeted memory reactivation or TMR, whereby a stimulus that has been associated with learning is presented again during sleep to bring on a recapitulation of waking brain activity,” researchers write in the journal JNeurosci.

“Our demonstration that memory reactivation contributed to skilled performance may be relevant for neurorehabilitation as well as fields concerned with motor learning, such as kinesiology and physiology.”

“Present findings support the conclusion that execution-based components of motor skill can be reactivated during sleep, resulting in enhanced performance after awakening,” Cheng’s team adds in a statement to SWNS. “By extension, activating motor control networks during sleep may be an integral part of the mechanism for consolidation of motor skills.”

“Furthermore, these findings open the door to future applications of TMR to augment the learning of a wide variety of motor skills,” the study authors tell SWNS. “Nightly TMR may even be useful in a clinical context to supplement daily rehabilitation efforts for patients hoping to decrease motor impairments due to stroke or neurological dysfunction.”