GREENBELT, Md. — Sea level around the world is not only increasing, but it’s doing so faster over the last 25 years than in years before, according to a recent NASA study.

The acceleration in sea level rise is caused by increased ice melting in Greenland and Antarctica, and researchers say the potential exists to double the total sea level rise projected to occur by 2100, when compared to a constant sea level rise model.

If the current rate of sea level rise continues to accelerate at this pace, the global level will rise about 26 inches by 2100, enough to significantly alter the geography of many coastal cities around the world.

“This is almost certainly a conservative estimate,” says NASA Sea Level Change team member Steve Nerem, a professor of Aerospace Engineering Sciences at the University of Colorado Boulder, in a statement. “Our extrapolation assumes that sea level continues to change in the future as it has over the last 25 years. Given the large changes we are seeing in the ice sheets today, that’s not likely.”

The increases were calculated using satellite altimeter measurements since 1992.

Rising concentrations of greenhouse gases like carbon are causing the oceans and the atmosphere to warm, causing more ice to melt around the world. Another factor that contributes to rising sea levels is water expanding as it warms, known as thermal expansion.

The study’s authors say volcanic eruptions can influence global sea rise, along with changing climate patterns such as El Niños and La Niñas, which can affect ocean temperatures. Such influencers were taken into account by the research team when calculating results.

NASA will launch two satellite missions this year to improve worldwide sea level projections. They will monitor the ice mass in Greenland and Antarctica and the elevation of glaciers and ice sheets.

The study was published Feb. 12 in the journal Proceedings of the National Academy of Sciences. 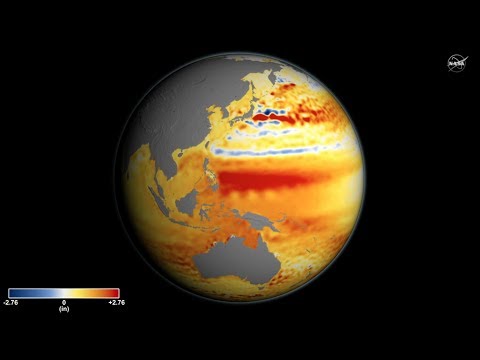