LAWRENCE, Kan. — Even cave men and women cared about oral hygiene. Well, sort of. A new study of teeth from Neanderthals shows that our earliest ancestors practiced a primitive form of dentistry, using a toothpick-like tool to help alleviate a toothache.

Researchers at the University of Kansas analyzed four teeth from a Neanderthal that lived 130,000 years ago. The teeth and other fossils were discovered in Croatia sometime between 1899 and 1905.

Using a microscope, the research team identified toothpick grooves on the side of the teeth, as well as other signs of tools that the Neanderthals likely used to deal with irritation in the mouth.

“As a package, this fits together as a dental problem that the Neanderthal was having and was trying to presumably treat itself, with the toothpick grooves, the breaks and also with the scratches on the premolar,” says David Frayer, professor emeritus of anthropology, in a university news release. “It was an interesting connection or collection of phenomena that fit together in a way that we would expect a modern human to do. Everybody has had dental pain, and they know what it’s like to have a problem with an impacted tooth.”

Though the Neanderthal’s jaw was not located to test for signs of periodontal disease, the grooves and scratches, along with enamel fractures, indicate that it was dealing with discomfort for some time.

It’s not known what Neanderthals used to act as a toothpick back then, but the researchers believe a piece of bone or even a blade of grass may have been the tool of choice.

“It fits into a pattern of a Neanderthal being able to modify its personal environment by using tools,” says Frayer, “because the toothpick grooves, whether they are made by bones or grass stems or who knows what, the scratches and chips in the teeth, they show us that Neanderthals were doing something inside their mouths to treat the dental irritation. Or at least this one was.”

The study was published in the Bulletin of the International Association for Paleontology. 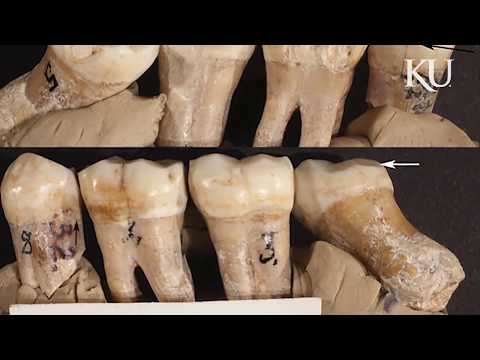