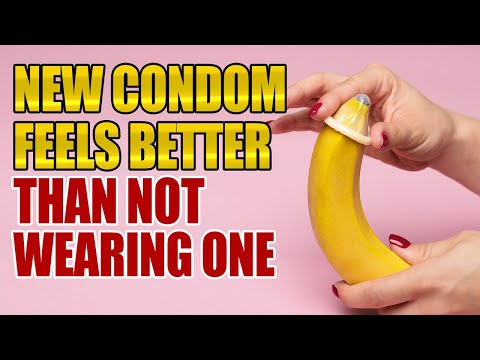 COLUMBUS, Ohio — A new condom design may end up increasing the use of protection during sex while also lowering the number of sexually transmitted infections, a new study suggests. How are scientists doing this? It’s simple — by making the sexual experience much more pleasurable for everyone involved.

A team from The Ohio State University says the CSD500 includes a gel that enhances erection firmness, size, and duration for men. Although it’s not available in the United States yet, the CSD500 condom is already on the market in dozens of European countries, as well as in Saudi Arabia and the United Arab Emirates.

In the new study of 500 couples in heterosexual monogamous relationships in Vietnam, the Ohio State team compared the CSD500 to standard condoms — measuring each user’s enjoyment and willingness to use protection. Results show participants using the CSD500 were much more accepting of using condoms, had an easier time putting on the condom during sex, and said it had a more natural feel than standard prophylactics.

Interestingly, 16 percent actually said using the CSD500 made having sex feel better than not using any protection at all.

Study authors chose to conduct their study in Vietnam because of the local stigma surrounding hormonal contraception, like birth control pills. For women, researchers believe this new condom will help cut down on both unwanted pregnancies and cases of STDs, such as HIV.

“Married women account for about one-third of HIV cases in Vietnam, and most were exposed to the virus through sexual activity with their husbands. Worldwide, more than 80% of HIV cases in women result from sexual exposure to husbands or primary partners,” says study lead author Maria Gallo in a university release.

“In a marriage or a long-term relationship, asking for condom use might feel like you are suggesting that the person is having sex with other partners or that the person has HIV or another sexually transmitted infection,” Gallo continues.

“A condom such as CSD500 could be helpful for women in established relationships because they may face less difficulty in asking a partner to wear a condom for his pleasure than for pregnancy or disease prevention.”

Study authors add that the success of the CSD500, made by Futura Medical, could also help overcome the common obstacles that often make using a condom unpopular with men. They add that the product’s ability to increase the pleasurable experience of wearers will help the nine to 37 percent of users who experience erection issues while trying to put on condoms.

“This experience – especially during initial, formative sexual encounters – has been shown to make some men less confident about their ability to maintain an erection during condom use. This can then cause a negative feedback loop of erectile dysfunction and dissuade men from attempting to use a condom again,” Gallo explains.

“By increasing blood flow within the penis and causing a firmer erection, CSD500 use could allow men to become comfortable and experienced with condoms, enabling them to overcome perceived or actual performance issues.”

The team notes that Futura Medical provided the condoms for their study but did not take part in the actual research.

The findings appear in the Journal of Sex Research.