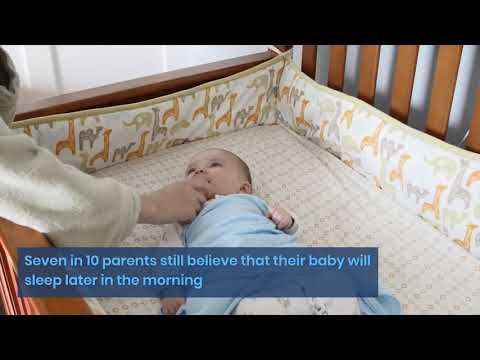 NEW YORK — Does keeping your kids up all day help them go to sleep faster at bedtimes? According to a new survey of 2,000 parents with children ages five and under, it might not matter. More than two-thirds believe these types of sleeping myths or old wives’ tales regardless.

Whether they hear it from their own parents (59%) or read it online (49%), new parents are open to testing out these sleep training methods, like keeping their baby on a strict sleep schedule (67%) or “camping out” so that their child becomes less dependent (60%). Seven in 10 parents still believe that their baby will sleep later in the morning if they go to sleep later and over half would avoid rocking their baby to sleep to prevent dependency (53%). On average, new parents test out these myths for five months before deciding whether or not it works for them.

Conducted by OnePoll and commissioned by Naturepedic for Baby Safety Month, the survey also finds parents of young children worry the most when their baby is sleeping than at any other time of the day. One in 10 didn’t know about sudden infant death syndrome (SIDS) prior to having children and another 11 percent weren’t previously aware of the ABCs of sleep (A for alone, B for back, C for crib). Nearly a fifth of new parents had no idea that their baby could also develop sleep apnea.

‘Safe’ is the buzzword for new parents After learning about potentially threatening sleep conditions, it’s no surprise that nearly all parents try to go the extra mile to make their child’s sleeping environment as peaceful, comfortable, and safe as possible. Seventy-eight percent have purchased new bedding or a new mattress specifically to help their children learn how to sleep through the night. They’ve also made their kids’ sleep environment comfortable by putting on a night light (44%), purchasing stuffed animals (41%), and giving their child comfortable clothing (39%).

On average, parents spend four hours a week researching the best products for their child — especially clothing (56%) and mattresses/bedding (46%). Moms and dads are most drawn to labels that say “safe” (50%), breathable/breathe safe (44%, 39%), non-toxic (37%), or organic (37%). No matter how much research they do, four in five parents wish companies were more transparent about the materials they use in their baby products (81%).

Four in five parents are confident in their understanding of how safe the components that make up the products they purchase for their child are and 77 percent believe breathability and waterproofing are equally important when purchasing a crib mattress. Additionally, seven in 10 believe it’s important to purchase organic for their baby.

“Since parents are most concerned when their babies are sleeping, it’s imperative that parents must have clear, transparent, and concise information about what’s truly safe for their children,” says Barry A. Cik, founder and technical director of Naturepedic, in a statement. “Unfortunately, there are many misleading claims out there which makes it very challenging for parents. The first step is to look for certain certifications like GOTS and MADE SAFE.” Seven in 10 also wish there was more information available on how to take care of the products they purchase for their child. The mattress, in particular, is an area of concern for many parents since three of the top five myths or urban legends parents believe in involve their child’s sleep space.

“If parents have a breathable mattress, do they know exactly what their babies are breathing in? There are chemical concerns if the mattress is not certified organic, and hygienic concerns when breathable mattresses are not waterproof, which is frequently the case,” Cik adds. “There are major concerns to think about as children have frequent accidents on their mattresses.”