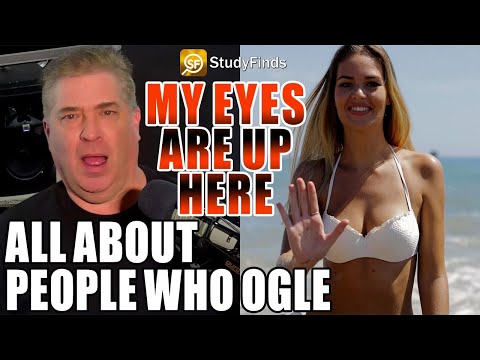 JOONDALUP, Australia — Have you even been caught gazing at an extremely attractive person as they walk by? Although some may think the expression “look, but don’t touch” applies here, a new study finds even looking at someone’s body too much can lead to negative attitudes about the opposite sex. Researchers from Edith Cowan University say those who ogle other people’s bodies regularly tend to harbor more harmful opinions about sexual assault.

Although the study focuses on both men and women, researchers found that men are more likely to stare at a woman’s body instead of her face. Additionally, men who admitted to ogling women more often were also more likely to hold the opinion that women tolerate or even welcome rough sexual behavior.

“Gazing at someone’s body instead of their face is one form of sexual objectification, or valuing people for their bodies over their minds or personality,” says study leader and psychology researcher Dr. Ross Hollett in a university release. “This sexually objectifying gaze behavior can lead to more harmful attitudes and behaviors.”

‘I have trouble not looking at it’

Researchers used eye tracking technology while studying 167 straight participants who were looking at images of either fully or partially dressed men and women.

The team also asked more than 1,000 heterosexual people to complete a self-report on their own tendencies to gaze at other people’s bodies. Participants in this survey rated statements including “once I notice an attractive man/woman’s body, I have trouble not looking at it” and “no matter where I am, I typically find myself looking at the bodies of men/women.”

“Using eye tracking, we found male participants showed strong preferences for gazing at the bodies of partially and fully dressed women instead of their faces,” Dr. Hollett reports.

“By contrast, women did not show body gaze preferences for any of the male or female imagery. In fact, they largely showed balanced gaze profiles (similar gaze towards both the head and body), with the exception of a preference to gaze at the heads of fully clothed men,” the study author adds. “Men were also more likely to self-report gazing at women’s bodies more than women self-reported gazing at men’s bodies.”

Along with examining the group’s gazing habits, researchers also looked at each participant’s relationship status and their responses to certain statements regarding sexual assault. Study authors found a concerning link between respondents who ogle the opposite sex more often and their views on violent sexual behavior.

“Specifically, men who tended to gaze at women’s bodies were more likely to assume that women invite or tolerate rough sexual conduct. That is, they were more likely to agree with statements like ’women find forced sex a turn on’ and ‘women secretly desire to be raped’,” Dr. Hollett says.

“When we observe someone engaging in excessive body gaze, we can assume they are more likely to agree with certain sexual assault beliefs which might put them at higher risk of being a perpetrator,” he adds.

“This study has shown that similar patterns of behavior emerge when measuring gaze using self-report and eye tracking technology which suggests heterosexuals are largely aware of their gaze habits and possibly use them to communicate sexual interest and intentions to the opposite sex,” Hollett concludes. “Understanding how women and men look at each other is important for explaining and predicting social behavior, particularly those behaviors that have harmful consequences.”

The findings appear in the journal Archives of Sexual Behavior.