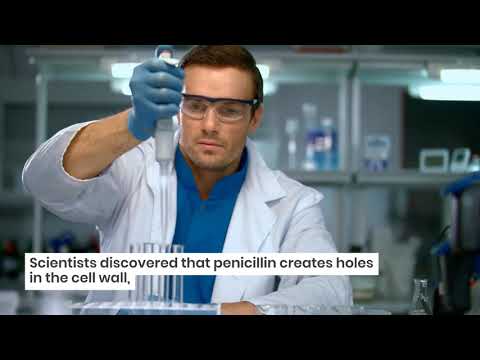 SHEFFIELD, England — Since penicillin’s discovery by Alexander Fleming over 80 years ago, the antibiotic has helped millions of people overcome illnesses and infections. However, the mechanism of how the drug actually works was largely unknown – until now. Scientists have finally discovered the method by which penicillin kills bacteria, and, this new information could lead to the creation of a superbug killer!

While it was understood that antibiotics work by preventing cell wall growth, researchers have now discovered exactly how antibiotics kill bacteria. Furthermore, scientists plan to apply this knowledge to create new drugs to combat antibiotic-resistant superbugs. The National Health Service and health organizations across the world are trying to reduce the use of antibiotics, especially for health problems that are not serious.

Due to the overuse of antibiotics, they are less effective. This has led to the surge of superbugs like Methicillin-resistant Staphylococcus aureus, or MRSA, and the bacteria that can cause drug-resistant tuberculosis.

An international team, led by scientists from the University of Sheffield in England, discovered that penicillin creates holes in the cell wall, which enlarge as the cell grows, eventually killing the bacteria. The growth of these holes leads to failure of the cell wall and death of the bacteria, something which scientists now plan to apply in order to create new therapeutics for antibiotic-resistant superbugs.

“Penicillin and other antibiotics in its class have been a centerpiece of human healthcare for over 80 years and have saved over 200 million lives. However, their use is severely threatened by the global spread of antimicrobial resistance. Concentrating on the superbug MRSA, our research revealed that the antibiotics lead to the formation of small holes that span the cell wall that gradually enlarge as part of growth-associated processes, eventually killing the bacteria,” says Simon Foster, a professor from the University of Sheffield’s School of Biosciences, in a statement.

“We also identified some of the enzymes that are involved in making the holes. Our findings get to the heart of understanding how existing antibiotics work and give us new avenues for further treatment developments in the face of the global pandemic of antimicrobial resistance,” adds Foster.

Using this knowledge and an understanding of how the enzymes are controlled, the scientists also showed the efficacy of novel combination therapy against the bacterium Staphylococcus aureus. The team worked with a simple model for how the bacterial cell wall expands during growth and division and established a hypothesis for what happens when this is inhibited by antibiotics like penicillin.

The predictions of the model were tested using a combination of molecular approaches, including high-resolution atomic force microscopy.