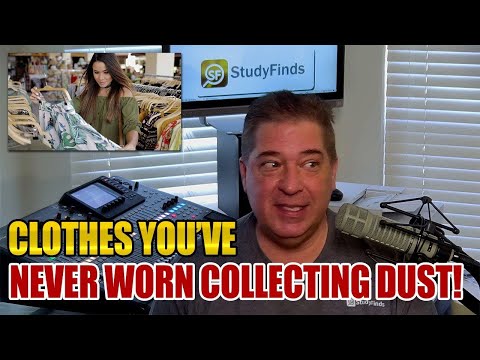 LONDON — Despite a closet full of clothes, people complain that they have nothing to wear six times a month. The new finding comes from a recent poll from the United Kingdom surveying over 2,000 British adults. One notable finding was that people had an average of $268.44 worth of outfits that had never been worn.

About 8 to 10 people said they regularly wear the same clothes. Only 6% of adults said they wore everything in their wardrobe at least once.

The research brings insight into how people shop nowadays and the growing shift away from ‘speed purchasing.’ For example, 31% of 18 to 24-year-olds impulsively bought clothes because they were part of a trend, only to realize later their purchase wasn’t so great after all.

“These findings highlight a real shift in consumer mindset when it comes to the way we shop. It’s clear people want a smarter, more considered approach to investing in clothing and style and are seeking ways to make their wardrobes work harder, for longer,” says Ashley Burghardt, styling director at Stitch Fix UK, which commissioned the research.

Out of sight, out of mind

More than half of people chose not to wear certain clothes. This was not because the clothes no longer fit or were ugly. Rather, it was because they were buried under other clothes. Another 20% said they kept clothes for sentimental reasons — even if they have never worn them.

Sixty-five percent of adults said some unworn items still had tags on them. Of these, 32% will argue with housemates or significant others over clothes.

Invest in quality, not quantity

Despite most clothes being unworn, about 39% confess they want to shop and redo their whole wardrobe. In addition, nearly half of survey respondents want to invest in clothes they can wear for a while and, over time, lower their spending habits on clothes. Another 37% agreed that minimizing their closet would reduce the stress of getting ready every day.

“First, locate the items you love and wear the most and remove all of the unworn pieces. You’ll immediately have a clear idea of what may be missing. You’ll then be ready to focus on investing in quality pieces that can work with a variety of looks,” explains Ms. Burghardt. “My biggest advice is to focus on some core, staple items – a statement coat, a great-fitting pair of jeans, a high-quality t-shirt, and a sweatshirt from a brand you love. With just a few versatile essentials, you’ve built yourself a powerful day-to-day rotation of key pieces and a strong foundation for making smarter shopping decisions looking ahead.”