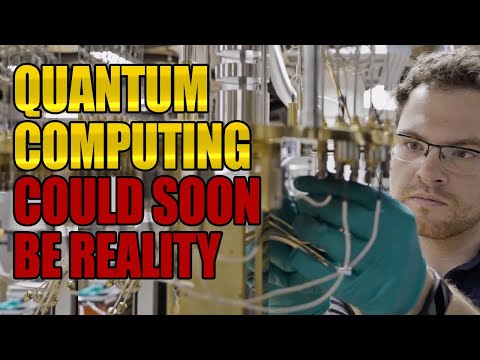 “Today’s publication shows our operations were 99 percent error-free,” says Professor Andrea Morello from the University of New South Wales-Sydney in a release.

“When the errors are so rare, it becomes possible to detect them and correct them when they occur. This shows that it is possible to build quantum computers that have enough scale, and enough power, to handle meaningful computation.”

Morello, who leads a team of researchers from the United States, Japan, Egypt, and Australia, is building what they call a “universal quantum computer” that is capable of performing more than one application.

“This piece of research is an important milestone on the journey that will get us there,” Prof. Morello adds.

Why are quantum computers so special?

In a nutshell, quantum computers find better and quicker ways to solve problems. Scientists believe quantum technology could solve extremely complex problems in seconds, while traditional supercomputers you see today could need months or even years to crack certain codes.

What makes these next generation supercomputers different from your everyday smartphone and laptop is how they process data. Quantum computers harness the properties of quantum physics to store data and perform their functions. While traditional computers use “bits” to encode information on your devices, quantum technology uses “qubits.”

The main difference between these two are that bits process information in binary fashion — meaning something is either a “0” or “1” or a yes/no answer. They represent this two-choice system through the absence or presence of an electrical signal in the computer.

Qubits, on the other hand, use quantum objects which act as information processors — such as spin (controlling the spin of charged particles in a semiconductor), trapped atoms or ions, photons (particles of light), or semiconducting circuits.

Like a bit, qubits also have two distinctive states representing “0” and “1,” but they are also capable of working in “superposition” states as well. A qubit can account for incompatible measurements (beyond 0 and 1) and even entangle with other qubits. All this makes them incredibly more powerful than the average computer bit.

Prof. Morello’s team achieved a one-qubit operation fidelity of 99.95 percent, meaning a qubit’s ability to successfully pass a test. They also achieved a two-qubit fidelity of 99.37 percent. The team conducted this test using a three-qubit system consisting of an electron and two phosphorous atoms inside silicon.

Another team in the Netherlands reached the 99 percent accuracy threshold using qubits consisting of electron spins in a stack of silicon and silicon-germanium alloy (Si/SiGe).

Scientists are focusing on using qubits in silicon because of their stability and capability to hold quantum information for long periods of time. Prof. Morello’s previous studies demonstrated that he could preserve quantum data in silicon for 35 seconds. That may not sound like a lot to the average person, but it’s nearly a lifetime for quantum computers.

“In the quantum world, 35 seconds is an eternity,” Prof. Morello explains. “To give a comparison, in the famous Google and IBM superconducting quantum computers the lifetime is about a hundred microseconds – nearly a million times shorter.”

Scientists discover how to make qubits interact with each other

The biggest breakthrough in the study, researchers say, is overcoming the need to isolate individual qubits in the computing process. Until now, it’s been seemingly impossible for qubits to interact with each other. The team used an electron encompassing two nuclei of phosphorus atoms to overcome this problem.

“If you have two nuclei that are connected to the same electron, you can make them do a quantum operation,” says study author Mateusz Mądzik.

“While you don’t operate the electron, those nuclei safely store their quantum information. But now you have the option of making them talk to each other via the electron, to realize universal quantum operations that can be adapted to any computational problem.”

“This really is an unlocking technology,” adds Dr. Serwan Asaad. “The nuclear spins are the core quantum processor. If you entangle them with the electron, then the electron can then be moved to another place and entangled with other qubit nuclei further afield, opening the way to making large arrays of qubits capable of robust and useful computations.”

With this breakthrough, study authors say semiconductor spin qubits in silicon could soon become the platform of choice as scientists build the next wave of reliable quantum computers.

“Until now, however, the challenge has been performing quantum logic operations with sufficiently high accuracy,” Prof. Morello concludes. “Each of the three papers published today shows how this challenge can be overcome to such a degree that errors can be corrected faster than they appear.”

The findings are published in the journal Nature.