POTSDAM, Germany — Does bad weather really impact how well businesses perform? It turns out it does. Researchers from the Potsdam Institute for Climate Impact Research find that productivity goes down when the number of rainy days go up.

Their study reveals high-income countries feel this the most, with service and manufacturing sectors hit hardest. The findings have implications for climate change policies worldwide as extreme weather events occur more frequently.

“This is about prosperity, and ultimately about people’s jobs. Economies across the world are slowed down by more wet days and extreme daily rainfall – an important insight that adds to our growing understanding of the true costs of climate change,” says lead author Dr. Leonie Wenz in a university release.

Too much rain in certain areas is bad for business

In July, record-breaking rainfall brought severe floods to Europe, where 200,000 properties lost electrical power. In the same month, torrential rain led to devastating floods in Henan province, China, uprooting more than one million people. Catastrophic events like these cause billions of dollars in property damage.

“Macro-economic assessments of climate impacts have so far focused mostly on temperature and considered – if at all – changes in rainfall only across longer time scales such as years or months, thus missing the complete picture,” Dr. Wenz explains.

“While more annual rainfall is generally good for economies, especially agriculturally dependent ones, the question is also how the rain is distributed across the days of the year. Intensified daily rainfall turns out to be bad, especially for wealthy, industrialized countries like the US, Japan, or Germany.” 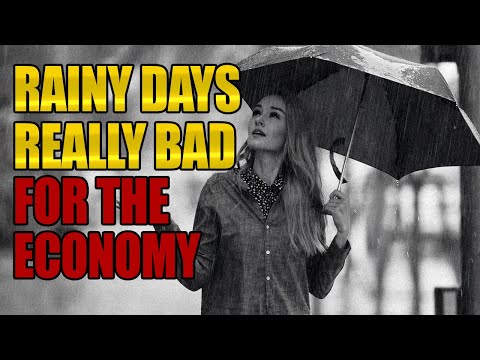 Extreme rainfall has the biggest influence

The international team analyzed sub-national economic output for 1,554 regions across 77 countries from 1979 to 2019. They combined the data from agricultural, industrial, and service sectors with high-resolution records of global daily precipitation over the past 40 years.

By using detailed statistics beyond simple averages, the researchers found rain has the most profound financial effect. Results suggest intensified rainstorms, driven by global warming from burning oil and coal, will harm the global economy. Droughts that differ from historical monthly averages may also lead to economic losses.

“We identify a number of distinct effects on economic production, yet the most important one really is from extreme daily rainfall,” says first author Maximilian Kotz, a PhD student at Potsdam. “This is because rainfall extremes are where we can already see the influence of climate change most clearly, and because they are intensifying almost everywhere across the world.”

Estimates predict there will be alterations in the Earth’s hydrological cycle as a result of manmade climate change. Water availability affects agricultural productivity, labor outcomes, and even sparks global conflicts. Flash flooding can cause damage and impact economic output.

The team notes rainfall predictions are hard to model on a single country basis. It’s also difficult to estimate the global economic cost.

The ‘fingerprint of global warming’ is impacting the economy

“Our study reveals that it’s precisely the fingerprint of global warming in daily rainfall which have hefty economic effects that have not yet been accounted for but are highly relevant,” co-author Professor Anders Levermann explains.

“Taking a closer look at short time scales instead of annual averages helps to understand what is going on: it’s the daily rainfall which poses the threat. It’s rather the climate shocks from weather extremes that threaten our way of life than the gradual changes. By destabilizing our climate we harm our economies. We have to make sure that our burning of fossil fuels does not destabilize our societies, too.”