STANFORD, Calif. — An extraordinary robotic bird inspired by parrots and falcons could help rescue people from wildfires, according to a new study. The flying machine, dubbed “SNAG,” mimics the movements of real birds to perch on various surfaces and carry objects, say scientists.

Birds have the ability to land and perch on almost any branch, regardless of their shape, size and texture. Now, researchers at Stanford University have taken inspiration from our feathered friends to design the innovative flying robot, which could also be used to carry out environmental research.

“It’s not easy to mimic how birds fly and perch,” says co-author William Roderick, a Stanford graduate student in a statement. “After millions of years of evolution, they make take-off and landing look so easy, even among all of the complexity and variability of the tree branches you would find in a forest.”

Five high-speed cameras were used to record parrotlets, the second smallest parrot species, as they flew back between special perches. The perches contained sensors which captured the physical motions associated with the birds’ landings, perching and take-off. They were also designed to represent a variety of materials, including wood, foam, sandpaper and Teflon.

“What surprised us was that they did the same aerial maneuver, no matter what surfaces they were landing on,” says Roderick. “They let the feet handle the variability and complexity of the surface texture itself.”

Based on their results, the researchers developed a robot which can fly around, catch and carry objects and perch on various surfaces, dubbed SNAG. Instead of bones, SNAG has 3D-printed structures and motors, with fishing lines standing in for muscles and tendons.

Each of SNAG’s legs is based on those of a peregrine falcon and equipped with motors to move back and forth, and grasp objects. This gives SNAG an especially strong gasp and high-speed clutch, which can be triggered to close in 20 milliseconds. Once wrapped around a branch, the robot’s ankles lock before a device on the right foot reports SNAG has landed, triggering a balancing algorithm to stabilize it.

SNAG’s abilities were tested using a rail system which launched it at different surfaces, at predefined speeds and orientations. The robotic bird successfully caught objects thrown by hand, including a prey dummy, a corn hole bean bag, and a tennis ball.

There are countless applications for the researcher’s invention, including search and rescue and wildfire monitoring. It could also be used to gain a better understanding of bird biology and environmental research. For example, they were able to study the micro-climate in Oregon by attaching a temperature and humidity sensor to the robot.

“Part of the underlying motivation of this work was to create tools that we can use to study the natural world,” says Roderick. “If we could have a robot that could act like a bird, that could unlock completely new ways of studying the environment.”

The findings are published in the journal Science Robotics. 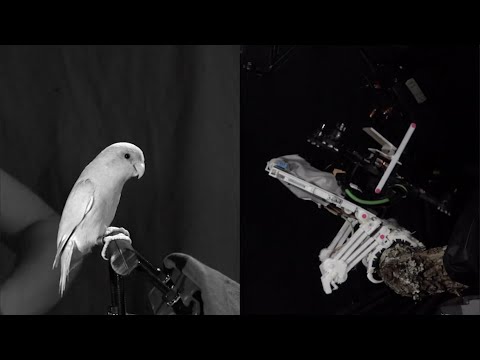