WASHINGTON — Public transportation is the lifeblood for people living in many major cities around the world. However, where these commuters choose to sit on a crowded bus or train may increase their exposure to particles carrying COVID-19, a recent study warns.

Researchers at IBM Research Europe have developed a model showing the differences in ventilation depending on where someone sits on a mass transit vehicle. Thier study focused on the common characteristics of asymptomatic transmission, including air and droplet dynamics, heat transfer, evaporation, humidity, and effects of ventilation systems.

“By visualizing the droplets and the flow, you realize the number of physical phenomena taking place around us that go unnoticed, such as the complex interactions between natural body plumes, exhalation, and ventilation,” explains author Carlos Peña-Monferrer in a media release. “When it comes to preventing risk of infection, this is precisely what makes it difficult to contain.”

Using their model, the team looked at what happens to tiny droplets (aerosols) when someone talks while sitting in a row of commuters. In some of these vehicles, air pumps in from the top and exits through vents on the bottom near the window seats.

This creates “internal recirculation” which keeps the temperature comfortable and removes airborne contaminants from the space. Despite the overall usefulness of these features, study authors wanted to see if every seat sees the same benefits.

They found that droplets from passengers in the window seats rise up more and contaminate the space of other passengers to a lesser extent than other seats. Conversely, exhaled droplets from people in a middle seat invaded the space of an aisle passenger more frequently. This points to the downward flow of ventilation in the aisle seats pushing virus droplets down and increasing an aisle passenger’s risk of getting sick.

The model also shows that the vehicle’s ventilation system immediately drags down speech droplets coming from commuters in aisle seats.

“These high-resolution simulations were focused on public transportation vehicles, but they could be extended to commercial or residential buildings, health care facilities, offices, or schools,” Peña-Monferrer concludes.

The findings appear in the journal Physics of Fluids. 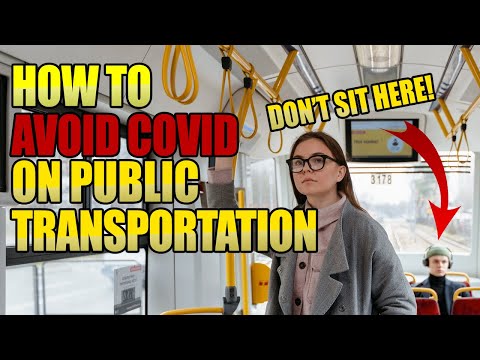